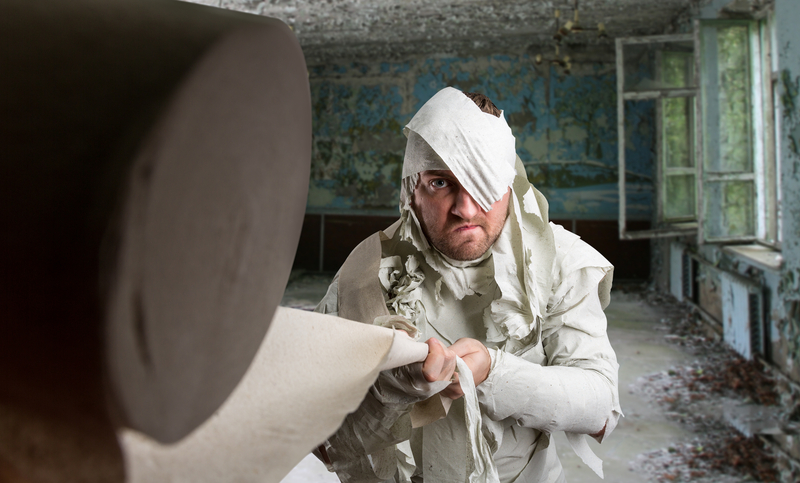 One of the most baffling twists of the current Covid-19 emergency has been the run on toilet paper. Toilet paper hoarding has spurred dozens of hilarious memes, sparked fights in supermarket aisles, and provided fodder for a lot of bathroom humor. One meme stated, “If you need 144 rolls of toilet paper for 14 days of quarantine, you probably should have seen a doctor long before the Covid-19 scare.” Another meme shows a confused man receiving the news he tested positive for the virus. He declares, “That can’t be correct. I have over 40 cases of Costco water and 200 rolls of toilet paper.” The United States isn’t the only country experiencing toilet paper shortages. Australia has also reported toilet paper hoarding. In response, an Australian newspaper printed extra blank pages to be used as toilet paper after coronavirus emptied some supermarket shelves.[1] Aleesha Khaliq reports, “In a bid to tackle the shortage, The NT News provided a practical — if unconventional — solution. Australians living in the Northern Territories would have noticed … eight pages in the paper had been left bare, except for watermarks and a cut-out guide edition. ‘Run out of loo paper? The NT News cares,’ the newspaper read. ‘That’s why we’ve printed an eight-page special liftout inside, complete with handy cut lines, for you to use in an emergency.'” All this panic buying begs the question: Is there really a toilet paper shortage?

No need to panic

“If there’s one image that captures the panic seeping through the United States this week,” write Michael Corkery (@mcorkery5) and Sapna Maheshwari (@sapna), “it might be the empty store shelves where toilet paper usually sits.”[2] What has changed, they note, is demand rather than supply. They report, “Major retailers say toilet paper hasn’t been out of stock in stores for more than a day or two, or even a few hours. Manufacturers, paper industry executives say, are raising production to meet demand, but there is only so much capacity that they can or are willing to add. They want to satisfy panic buying without going overboard and creating a glut on the market when the surge subsides.” Corkery and Maheshwari remind people Covid-19 causes respiratory ailments not intestinal discomfort. “Unlike some other products,” they write, “toilet paper is not likely to be used more by Americans who are stricken with respiratory symptoms, even as the coronavirus spreads.”

Regardless of the fact that the toilet paper supply chain is fully functional, Scottie Andrew (@scottieandrew) reports, “Retailers in the US and Canada have started limiting the number of toilet paper packs customers can buy in one trip. Some supermarkets in the UK are sold out. Grocery stores in Australia have hired security guards to patrol customers.”[3] Like Corkery and Maheshwari, Andrew wonders why there is a run on toilet paper. “Toilet paper does not offer special protection against the virus. It’s not considered a staple of impending emergencies, like milk and bread are. So why are people buying up rolls more quickly than they can be restocked?” Good question. She posits five possible explanations. They are:

Reason 1. People resort to extremes when they hear conflicting messages. “Steven Taylor is a clinical psychologist and author of ‘The Psychology of Pandemics,’ which takes a historic look at how people behave and respond to pandemics. And compared to past pandemics, the global response to the novel coronavirus has been one of widespread panic. ‘On the one hand, [the response is] understandable, but on the other hand it’s excessive,’ Taylor, a professor and clinical psychologist at the University of British Columbia, told CNN. ‘We can prepare without panicking.'”

Reason 2. Some people are reacting to the lack of a clear direction from officials. “People buying up toilet paper and other household supplies may be preparing for [widespread quarantines] in their city, said Baruch Fischhoff, a psychologist and professor in the Department of Engineering and Public Policy and the Institute for Politics and Strategy at Carnegie Mellon University. ‘Unless people have seen … official promises that everyone will be taken care of, they are left to guess at the probability of needing the extra toilet paper, sooner rather than later,’ he told CNN.”

Reason 4. It’s natural to want to overprepare. “There may be some practicality in stocking up, says Frank Farley, a professor at Temple University and former president of the American Psychological Association. With the CDC and other international health agencies now advising that certain populations should stay home and avoid contact with other people or crowds, it’s natural to want to prepare, he said.”

Reason 5. It allows some to feel a sense of control. “The people who are stocking up on supplies are thinking about themselves and their family and what they need to do to prepare, Taylor said — not healthcare workers, sick people or even regular folks who might run out of toilet paper sometime soon. … People only act that way out of fear. Fischhoff said that preparing, even by purchasing toilet paper, returns a sense of control to what seems like a helpless situation.”

Jessica Guynn (@jguynn), Mike Snider (@MikeSnider), and Kelly Tyko (@KellyTyko) advise, “Keep calm and stop hoarding. The spread of coronavirus in the U.S. won’t wipe out our toilet paper supply. Or supplies of hand sanitizer, bottled water and ramen. That is, unless the frenzied stampedes for hand sanitizer and bottled water continue at their current pace.”[4] They note, “Supply chain experts say to stop worrying about hoarding basic necessities beyond having on hand the recommended 14-day emergency supply of food and necessities.” That’s good advice.

Jay L. Zagorsky (@Prof_Jay_Z), a Senior Lecturer at Boston University’s Questrom School of Business, notes, “The average person in the U.S. uses about 100 rolls of toilet paper each year. If most of it came from China, this could be a huge problem because supply chains from that country have been severely disrupted as a result of COVID-19. The U.S., however, imports very little toilet paper – less than 10% in 2017. And most of that comes from Canada and Mexico. The U.S. has been mass producing toilet paper since the late 1800s. And while other industries like shoe manufacturing have fled the country, toilet paper manufacturing has not. Today there are almost 150 U.S. companies making this product.”[5] As far as I can tell, none of these companies has stopped producing.

Emilia Ashton (@EAdeliversnews) reports, “Toilet paper as we know it today wouldn’t be available until 19th Century CE. New York entrepreneur, Joseph Gayetty, would be the first to release a commercial toilet paper in the US. But his success was limited due to people not wanting to pay for it when they could just use a brochure that would come in the post. Meanwhile in UK, the British Perforated Paper Company developed a coarse toilet paper which they began to sell commercially. However, both were sold as individual sheets of paper in a box, but this was not the roll form which we have grown accustomed to.”[6] Many of us grew up hearing parents or grandparents talk about their outhouses equipped with the latest Sears catalog. When plumbing moved indoors, catalog pages became problematic. Ashton explains, “It would be the Scott brothers who first put toilet paper on a roll in America in 1890. But while the brothers had some success by selling it to hotels and drug stores, they had difficulty convincing the public to buy their product. It was only when flushing toilets, which required a product that would dissolve easily in water and wouldn’t get stuck in the pipes, became available in most homes that toilet paper became a staple in people’s houses.”

In some areas, panic buying has already subsided. A few days after confronting empty shelves, Zagorsky reports, “I stopped by [my local Costco], and the toilet paper aisle was fully stocked.” Eight rolls of toilet paper should last the average person a month. Times that by the number of people in your household and you should be good through any extended quarantine. There’s really no shortage and no need to panic.