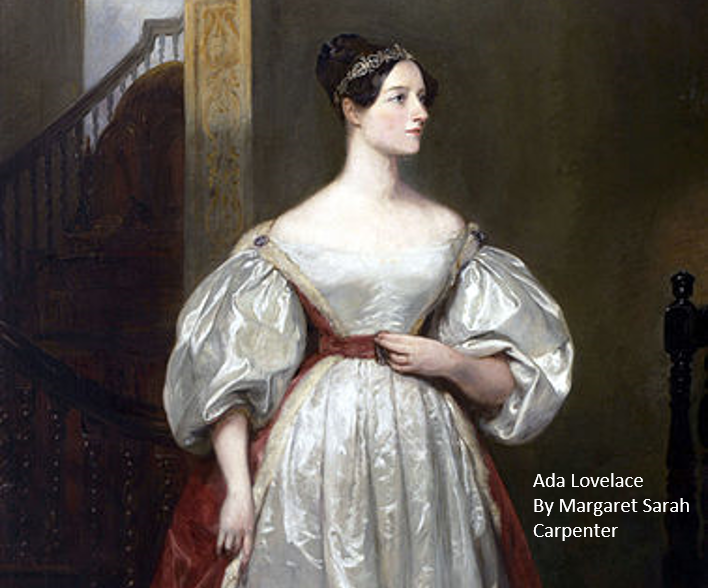 You may never have heard of Ada Lovelace Day. You might not even have heard of Ada Lovelace. If you fall into the latter category, you should get to know her. Augusta Ada Byron was born 10 December 1815 to George Gordon Byron (better known as Lord Byron) and his wife Anne Isabella Noel Byron. Wikipedia offers this brief introduction to the great lady. “[Ada] was an English mathematician and writer, chiefly known for her work on Charles Babbage’s proposed mechanical general-purpose computer, the Analytical Engine. She is believed by some to be the first to recognize that the machine had applications beyond pure calculation, and to have published the first algorithm intended to be carried out by such a machine. As a result, she is often regarded as the first to recognize the full potential of computers and as one of the first to be a computer programmer.”

On 8 July 1835, she married William, 8th Baron King, becoming Lady King. Three years later, her husband was made Earl of Lovelace and Viscount Ockham, which made Ada the Countess of Lovelace. The Lovelaces had three children: Byron; Anne Isabella; and Ralph Gordon. Despite being a young mother of three children, and suffering from severe health issues. She managed to make her mark in science. Her brilliance was never in doubt. Unfortunately, she died at the age of 36 on 27 November 1852. To honor her achievements, as well the achievements of other women in science, psychologist Penelope Lockwood came up with the idea for a day to honor her. The official Ada Lovelace Day website explains:

“Ada Lovelace Day was founded by Suw Charman-Anderson in 2009 and aims to raise the profile of women in science, technology, engineering and maths by encouraging people around the world to talk about the women whose work they admire. This international day of celebration helps people learn about the achievements of women in STEM, inspiring others and creating new role models for young and old alike. The inspiration for Ada Lovelace Day came from psychologist Penelope Lockwood, who carried out a study which found that women need to see female role models more than men need to see male role models. ‘Outstanding women can function as inspirational examples of success,’ she said, ‘illustrating the kinds of achievements that are possible for women around them. They demonstrate that it is possible to overcome traditional gender barriers, indicating to other women that high levels of success are indeed attainable.’”

The Ada Lovelace Day celebration began in 2009 and is celebrated each second Tuesday in October.

Author Harriet Hall notes, “Reading through most accounts of history, we could be forgiven for assuming that women were not the warriors, the great thinkers nor the pioneering scientists who shaped and changed our world. That men alone birthed art, churned out literature and fiercely challenged the status quo, while women functioned only within the domestic realm. But though the canon has perpetually erased the contribution of women and their work has been systematically discredited, devalued and derided, their light has doggedly broken through the cracks.”[1] She adds, “[Ada Lovelace] has since received a multitude of posthumous accolades. In 1980, the US Department of Defense named a computer language after her, and Ada Lovelace Day is celebrated every October in recognition of her groundbreaking contribution to computer technology.”

History has too long ignored the contribution of women in all areas of our lives. Celebrating Ada Lovelace’s contribution to science, along with all other women of science, is important. The celebration comes just in time to honor two other women who just won the Nobel Prize for Chemistry. The official announcement stated:

“The Royal Swedish Academy of Sciences has decided to award the Nobel Prize in Chemistry 2020 to Emmanuelle Charpentier, Max Planck Unit for the Science of Pathogens, Berlin, Germany, and Jennifer A. Doudna, University of California, Berkeley, USA, ‘for the development of a method for genome editing.'”[2]

The press release goes on to state:

“Emmanuelle Charpentier and Jennifer A. Doudna have discovered one of gene technology’s sharpest tools: the CRISPR/Cas9 genetic scissors. Using these, researchers can change the DNA of animals, plants and microorganisms with extremely high precision. This technology has had a revolutionary impact on the life sciences, is contributing to new cancer therapies and may make the dream of curing inherited diseases come true. … Since Charpentier and Doudna discovered the CRISPR/Cas9 genetic scissors in 2012 their use has exploded. This tool has contributed to many important discoveries in basic research, and plant researchers have been able to develop crops that withstand mould, pests and drought. In medicine, clinical trials of new cancer therapies are underway, and the dream of being able to cure inherited diseases is about to come true. These genetic scissors have taken the life sciences into a new epoch and, in many ways, are bringing the greatest benefit to humankind.”

Congratulations to them. I also extend my gratitude to all other women who have ventured into the fields of science and contributed to our understanding of the world around us.