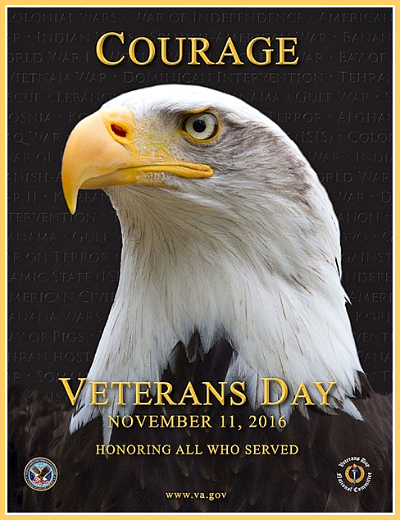 One of the bitterest U.S. presidential elections ever held is now over; but, the divisiveness it fomented will likely linger for a generation or more. That’s why this Veterans Day might be more important than any in recent memory. Veterans Day honors the millions of men and women who have set aside the pleasantries of civilian life to put on a uniform to defend freedom and democracy. The late Joseph Campbell wrote, “A hero is someone who has given his or her life to something bigger than oneself.” Giving one’s life to a greater cause doesn’t necessarily mean having to die for it. Our veterans have made sacrifices large and small to ensure America remains free and secure. The staff at Public Holidays provides the following history of Veterans’ Day.[1]

“Originally, Veterans Day was called ‘Armistice Day,’ and the date was chosen to commemorate the signing of the armistice with Germany that ended hostilities during World War I. The armistice, signed on November 11th, 1918, did not officially end that war, however. That came on June 28th, 1919, with the signing of the Treaty of Versailles. On the other hand, since the U.S. never signed the Treaty of Versailles like the other Allies, one could say that for the U.S. at least, the November 11th armistice really did end the war. At first, the focus of Armistice Day was on the veterans of World War I, though it was always meant to honor all veterans of foreign wars, who risked their lives on the battle field to secure the freedoms of all Americans. Over time, with the passing away of the World War I generation and the coming of new conflicts during World War II, the Korean War, and the Vietnam War, the focus on the 1918 Armistice was lost and the name of the holiday was changed. Additionally, today, Veterans Day is generally regarded as honoring all those who ever served in the U.S. Armed Force rather than only those who actually fought in a war.

In 1919, the first celebration of Armistice Day took place, with Britain and the Allied nations of World War I all observing the day. Business as usual was briefly interrupted at 11am, the time when the armistice was signed with Germany. There were also parades and patriotic gatherings, and red poppies were put on display in many British Commonwealth countries. Another development took place in 1926, when Congress finally decided to declare that World War I was over. It was odd for this recognition of an existing reality to come seven years late, but without the U.S. agreeing to the Treaty of Versailles, there had been no official end to the war. Congress also made November 11th a day of prayer and thanksgiving and expressed a desire that the U.S. flag be on display during this day and that special ceremonies be held.

Finally, in 1938, Armistice Day became a permanent, official public holiday. Eerily enough, the holiday designed to honor World War I veterans became official only a few years before World War II arrived. The next stage in the history of Veterans Day came in 1954, when it received its present name. Congress made the change when pressed to do so by various private veterans organizations. A debacle involving Veterans Day came in 1971, when Congress changed the date from November 11th to the fourth Monday in October. This led to chaos because many states refused to recognize the change. Some would be celebrating in November while others did so in October, and the resistance to the date change never broke down. Finally, the date was changed back to November 11th beginning in 1978.

Another interesting Veterans Day ‘conflict’ involves a matter of grammar and spelling. Today, many people spell the holiday as ‘Veterans’ Day,’ but the official government-approved spelling is ‘Veterans Day.’ The explanation given is that the adjectival spelling instead of the possessive-case spelling shows that the holiday is about honoring veterans rather than a day that belongs to them.”

Jeff Miller has stated, “The willingness of America’s veterans to sacrifice for our country has earned them our lasting gratitude.” But the late President John F. Kennedy reminded us, “As we express our gratitude, we must never forget that the highest appreciation is not to utter words, but to live by them.” That means we, individually, have an obligation to defend freedom and democracy. Many of us put our words into action as we voted. We now have an obligation to encourage our politicians to set aside divisive ideologies so that pressing challenges can be addressed. Patriotism should trump ideology. In today’s bitter Washington climate, being a patriot will take courage. Mark Twain once wrote, “In the beginning of a change, the patriot is a scarce man, and brave, and hated and scorned. When his cause succeeds, the timid join him, for then it costs nothing to be a patriot.” This Veterans Day would be a good time for politicians to decide whether they are going to be patriots or ideologues; to decide whether they are going to be courageous and work together or hide cowardly behind party lines.

Today men and woman are fighting and dying around the world for our freedoms. Please join us at Enterra Solutions® in honoring them — and all veterans — on this Veterans Day.