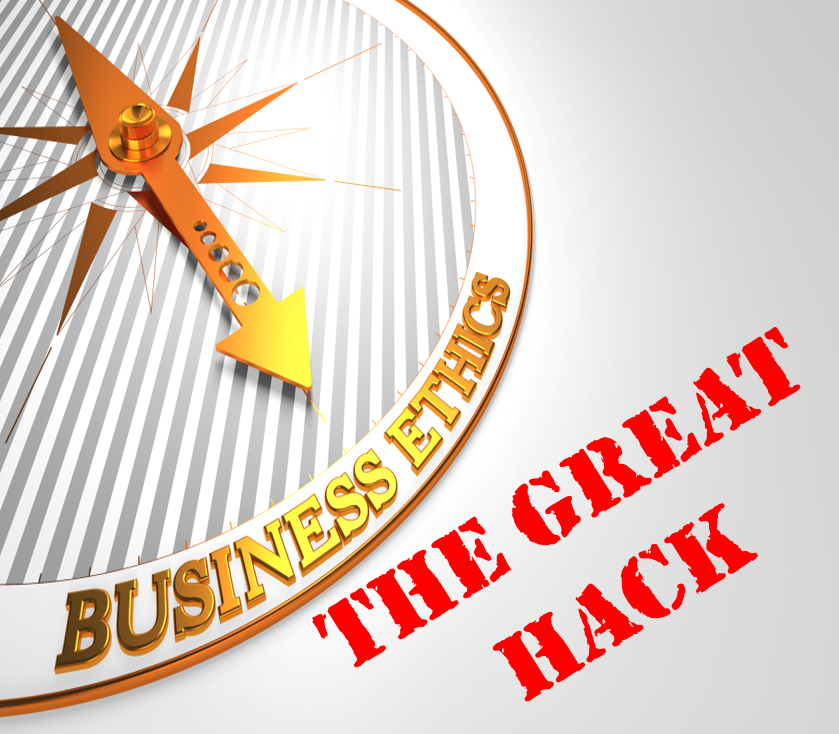 The Great Hack and the Future of Big Data in Business

The Netflix documentary “The Great Hack” has stirred up an incredible amount of controversy and discussion. NPR’s Sarah McCammon writes, “If you’ve ever considered deleting your Facebook page or limiting the information you share on social media, you’re not alone. After all, Facebook and the data firm Cambridge Analytica have been front and center in the online privacy debate since it was revealed … that Cambridge Analytica harvested the personal data of millions of people’s Facebook profiles without their consent. A new film called ‘The Great Hack’ delves into the backstory behind Cambridge Analytica, Facebook and the 2016 election.”[1] Businesses dismissing the debate as a soon-to-be-forgotten news story about politics could be in for a rude surprise. Janus Rose (@zenalbatross) explains, “The real ‘hack’ isn’t Cambridge Analytica, Facebook, or the 2016 election. It’s the system that made our data tragedies inevitable.”[2] Businesses increasingly rely on personal data to obtain value from their advertising dollars and to help them cater to consumers’ tastes and preferences. Losing access to such data as a result of unethical practices by some companies should be of concern to all businesses.

If you are not familiar with the documentary, journalist Carole Cadwalladr (@carolecadwalla) explains, “The Great Hack is the work of Jehane Noujaim and Karim Amer, the husband-and-wife team who made The Square, the Oscar-nominated film about the Arab spring. Here, they tell the story via the personal journeys of two contrasting individuals: David Carroll, a New York media professor who attempts a circuitous, difficult and ultimately unsuccessful journey via the English legal system to find out what data Cambridge Analytica held on him; and Brittany Kaiser, an ex-employee of Cambridge Analytica who turned ‘whistleblower’.”[3] Looking at the bigger picture, The Great Hack isn’t only about Facebook and Cambridge Analytica; rather, it’s a shot across the bow for all companies relying on personal data to benefit their business.

The importance of ethical use of personal data to businesses

Lindsey Bahr (@ldbahr) writes, “Anyone with a pulse and an internet connection knows that of course every click, every search and every purchase is being stored, saved, sold and commoditized for companies who want to sell you more, and better.”[4] Ethical companies use personal data to ensure ads are offered primarily to consumers interested in their products and services. Many of these companies have an established relationship with consumers. The Great Hack describes how such data can be used to manipulate consumers in unsavory ways. Kenneth Turan (@KennethTuran) explains, “What Kaiser and other former Cambridge employees revealed is that the company got use of information from a questionable personality test put together by Facebook. The goal of this test was not to inform users but to harvest personal data from the test-taker as well as the person’s entire friend network about what we like, what we fear, what gets our attention. This information was used to target what were known as ‘persuadables’ in key states, voters who were, one Analytica employee emphasizes, ‘bombarded until they saw the world the way we want them to, until they voted for our candidate.'”[5] Natasha Lomas (@riptari) puts it this way, “The Great Hack shows what happens when vital detail and context are cheaply ripped away at scale, via socially sticky content delivery platforms run by tech giants that never bothered to sweat the ethical detail of how their ad targeting tools could be repurposed by malign interests to sew social discord and/or manipulate voter opinion en mass.”[6]

Joe Berkowitz (@JoeBerkowitz) observes, “A top-10 worst feeling in the world is learning that you’ve been manipulated. Most people either believe themselves too sharp and savvy to be fooled, or they believe in the inherent goodness of others. Getting tricked, though, instantly and unambiguously obliterates both notions. This feels terrible. It feels so bad, in fact, that some people’s gut reaction upon learning they’ve been fooled is to convince themselves that, actually, they weren’t fooled, thank you very much; there’s been a mistake, you must be thinking of someone else.”[7] No one likes to be manipulated (although, in some ways, all advertising involves manipulation). Most consumers are smart enough to understand advertising is trying to persuade them to buy a product or service. Ethical companies do this forthrightly with information complemented by the occasional emotional tug. Andrew Deen (@AndrewDeen14) notes, “Digital technology and the rise of big data has spurred ongoing questions about maintaining integrity — in business and marketing. Business leaders are experiencing a new paradigm where everyone must take into consideration important issues, such as privacy, tracking and how we are utilizing data for personal use and profit.”[8] He adds, “Ethics encompasses how people react when faced with moral decisions. Transparency, as well as how companies use data and influence their customers, are key components of the standards that promote ethical corporate behavior. For enterprises, there’s a need for clearly defined ethical policies that align with company values and behaviors and empower staff members to make consistent and exemplary moral decisions.”

Unfortunately, we know myriad unethical companies are operating with impunity. Rose cites the work of former Harvard Business School professor Shoshana Zuboff, who coined a term for unethical use of personal data: Surveillance Capitalism. In a paper written in 2015, Zuboff quotes an anonymous data scientist at an unnamed Silicon Valley company, who stated, “The goal of everything we do is to change people’s actual behavior at scale. When people use our app, we can capture their behaviors, identify good and bad behaviors, and develop ways to reward the good and punish the bad. We can test how actionable our cues are for them and how profitable for us.” In today’s always-on environment, such behavior is likely to be revealed as the unscrupulous actions of an unethical company. Consumers and governments have already begun protesting and legislating; but, some fear it’s too little too late. In the end, ethical businesses will likely feel the impact more acutely than the nefarious organizations acting unethically in the first place.

Data is now the most valuable resource in the world. Companies are not going to relinquish that resource voluntarily. The demise of Cambridge Analytica, however, should be a warning to all companies willing to abandon their ethics in pursuit of profits. Bahr concludes, “These are interesting and fraught times that deserve an unflinching look at the perils of data rights and online privacy, but ‘The Great Hack’ is a reminder that documentaries are not always journalism.” The Great Hack undoubtedly had a political slant, but its impact is likely to be felt in non-political circles in the years ahead.