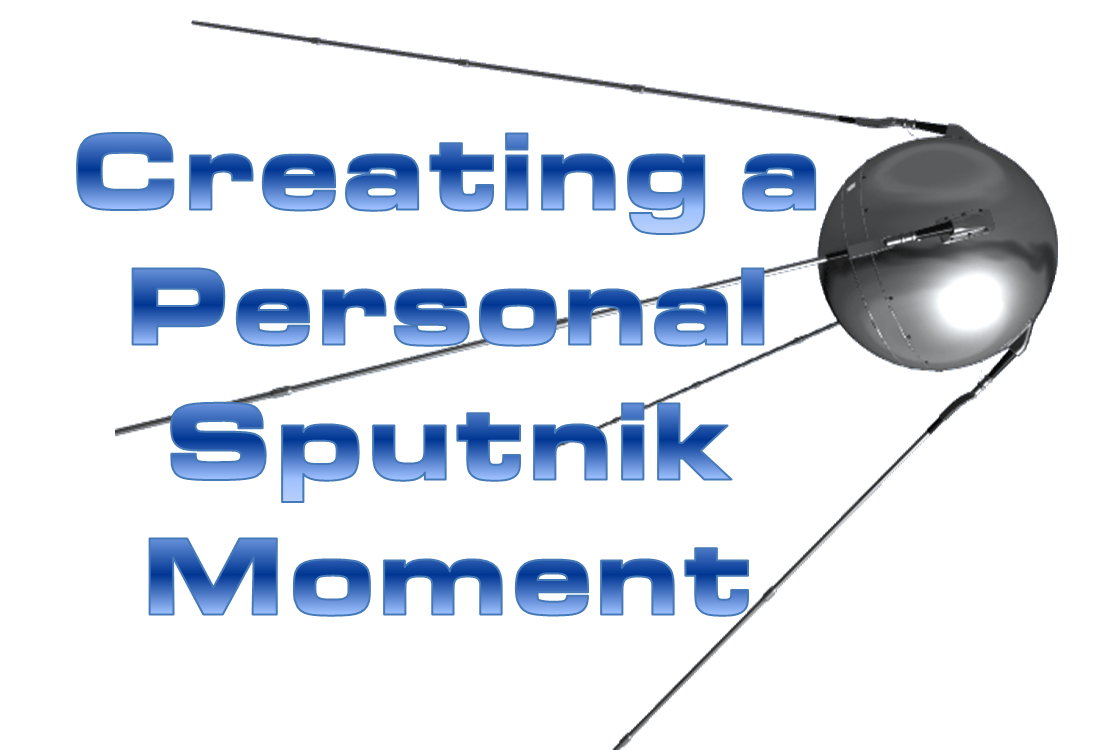 For those of us too young to remember the 1950s, the Soviet launch of its Sputnik satellite seems like ancient history. At the time, however, Sputnik created an enormous global stir. America was experiencing steady economic growth and the “Greatest Generation” were pursuing careers and raising families. Americans were secure in the knowledge that the United States was the most advanced and innovative nation on Earth. That’s why a shock was felt across the country when it was announced that the Soviets had beat the U.S. into space. After the launch of Sputnik, the space race was on and everyone knew that it would be won by the nation that educated the best and brightest scientists, engineers, technicians, and mathematicians. STEM education was in the spotlight and that emphasis only increased when John F. Kennedy was elected president just three years after Sputnik launched into orbit. Joe Maness, a high school mathematics teacher, and Dr. Richard Kerry Holtzin, Executive Director of S.T.E.M. for the Classroom, remind us how President Kennedy piqued America’s interest in STEM. “When President John F. Kennedy called upon our nation to take a stroll on the Moon one day,” they write, “he asked the nation to commit itself on a path of great expectations. One of the most compelling reasons for going to there was to raise the standards of education. After all, if our nation is going to the Moon (so the thinking went), then we’re going to need a copious amount of scientists, technologists, engineers, and mathematicians. It was indeed a very well-reasoned argument. Thus, S.T.E.M. education became a national priority.” [“S.T.E.M. Education For the 21st Century and Beyond,” OpEdNews, 10 January 2015] They then ask, “What went wrong?”

There are probably a lot of answers to that question and, frankly, the reasons that STEM subjects lost their luster are not really important. What’s important is getting more children to feel the same excitement about STEM subjects that a previous generation felt when it learned that Sputnik was orbiting the Earth. STEM education is important because it can better prepare students to meet life’s challenges; but, even if students choose not to pursue a STEM career, it will help them to better understand the world around them. If you don’t think understanding the world around us is a problem, then you might not have heard about the results of a recent Pew Research Center study. Julie Beck (@JULIEEBECK) reports, “In general, Americans believe in science. A new report by the Pew Research Center found that 79 percent of the 2,000 adults surveyed think science has ‘made life easier for most people.’ Seventy-one percent think that investment in science ultimately pays off. But on certain hot-button scientific topics of our day, Pew found wide gaps between what the public believes, and what scientists believe. You can probably guess which ones.” [“Americans Believe in Science, Just Not Its Findings,” The Atlantic, 29 January 2015] A public that is skeptical about science is neither a healthy nor a promising situation for America’s future. If we are going to have a brighter future, we are going to have to rely on science and technology to help us address national and global challenges.

Undoubtedly, what people think about science is another symptom of the polarization of American politics. But that is an article that needs to be written by someone else in another forum. My concern is for America’s children and the future they will be inheriting from us. Face it we are going to be leaving them with a lot of problems that we’ve been unable or unwilling to solve. It will take the best efforts of the coming generations’ best minds to address these problems. If we don’t provide them with the best possible education, our children won’t be equipped with the mental tools they will need to do the job. New York Times‘ columnist Charles M. Blow (@CharlesMBlow) worries that if things don’t change minorities and women are going to be the least well equipped groups to prosper in a technological future. “Few women and minorities are getting STEM (science, technology, engineering and mathematics) degrees,” he reports, “although STEM jobs are multiplying and pay more than many other careers.” [“A Future Segregated by Science?” The New York Times, 2 February 2015] He continues:

“This raises the question: Will our future be highly delineated by who does and who doesn’t have a science education (and the resulting higher salary), making for even more entrenched economic inequality by race and gender? … Even when minority students do get STEM degrees, there seems to be a disproportionate barrier to their finding work in those fields. ‘Top universities turn out black and Hispanic computer science and computer engineering graduates at twice the rate that leading technology companies hire them,’ an October analysis by USA Today found. … No matter what strides we make — or don’t — in the march toward racial and gender equality in this country, is this an area in which the future will feel more stratified, and in which the inequalities, particularly economic ones, will mount? Is science education a new area of our segregation?”

So how do we get our children (all of them) to get more excited about STEM education? How can we create a Sputnik moment for them? I don’t pretend to have all the answers to those questions. Perhaps hoping for a global Sputnik moment is too much. Our best chance of getting our children interested in STEM subjects may be to help them have their own individual Sputnik moments. That won’t happen if they are stoically seated in a classroom being lectured to. No lights will flash. No bells will ring. No excitement will be generated. I believe the only way to provide children with a personal Sputnik moment is to get them involved in a project during which they see how what they learn can be practically applied. That’s why I, along with a few colleagues, founded The Project for STEM Competitiveness — to help get a project-based, problem-solving approach into schools.

Technology is going to dominate the lives of our children. For the most part, it does now. That’s not a bad thing. If they are prepared to take advantage of technology, they will be much better equipped to meet life’s challenges. Lest I be accused of trying to limit education to STEM subjects, let me state that I also believe that art, the humanities, and civics are important subjects to teach our children so that they become well-balanced and well-informed citizens. Wisconsin’s Governor, Scott Walker, created a minor tempest when he tried to redefine the purpose of education as being a system that produces graduates who can “meet the state’s workforce needs.” In response to Walker’s initiative, Arthur H. Camins (@arthurcamins), Director of the Center for Innovation in Engineering and Science Education (CIESE) at the Stevens Institute of Technology, wrote, “Debate about the purposes of education never seems to end. Should young people become educated to get prepared to enter the workforce, or should the purpose of education be focused more on social, academic, cultural and intellectual development so that students can grow up to be engaged citizens?” [“What’s the purpose of education in the 21st century?” The Washington Post, by Valerie Strauss (@valeriestrauss), 12 February 2015] Camins’ answer to that question is in line with my thoughts on the subject. He explains:

“Over the last 50 years, anxiety about competition with the Soviet Union, Japan, and China for global economic, military and political dominance have supported periodic calls for more effective workforce development. Wisconsin Gov. Scott Walker recently tried to change the mission statement of the University of Wisconsin to focus exclusively on workforce development. With each new workforce development or economic competitiveness demand on our K-12 schools, there has been push-back from those who want greater emphasis on a broader view of education. But it doesn’t have to be either-or. Education should prepare young people for life, work and citizenship. Knowledge of the natural and engineered environments and how people live in the world is critical to all three purposes of education. Critical thinking, creativity, interpersonal skills and a sense of social responsibility all influence success in life, work and citizenship.”

Because of the uproar, Governor Walker eventually backed off his effort to redefine education’s goal. I think that was wise. It’s important to stimulate young minds. I want to get students excited about education. I believe that a hands-on project-based approach to education can help achieve those objectives a lot better than sitting quietly in a formal classroom setting. At the moment, there are lots of interesting concepts concerning education being considered. Each of them is focused on making education more interesting, effective, and exciting. The hope is that one of those approaches is the right one to reach individual students and that through them students experience a personal Sputnik moment.