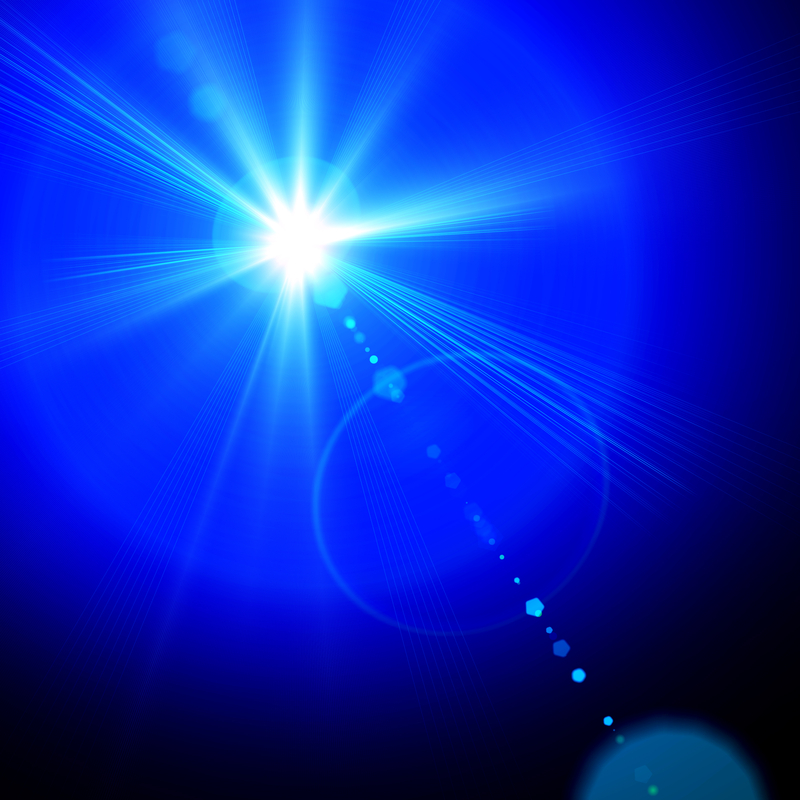 Light is fascinating. At the quantum level of physics, light can be simultaneously a particle and a wave. Haruyoshi Toyoda and Shinji Ohsuka, scientists at the Central Research Laboratory, Hamamatsu Photonics K.K., explain, “Light has the properties of a wave and a particle. The word ‘wavelength’ is used to express the wave or undulating property of light. It is the distance that light travels in one oscillation. … On the other hand, light also has the property of a particle. The intensity of the light varies depending on the number of particles. Bright light has many particles while dark light has fewer particles. These particles of light are called ‘photons’.”[1] They go on to note, light “is faster than anything known to man.” Humans have always been fascinated with light. Nearly 2500 years ago, the Greek philosopher Plato wrote, “We can easily forgive a child who is afraid of the dark; the real tragedy of life is when men are afraid of the light.” Light metaphorically represents understanding and knowledge. According to Dictionary.com, the term “I see the light” dates to late 1600s and “originally referred to religious conversion, the light meaning ‘true religion.” By the early 1800s, it was used more broadly for any kind of understanding.”[2] Now it looks like light could help us unravel some of the mysteries of the universe through its use in quantum computers.

You might be wondering what light has to do with quantum computing. Technology writer Daphne Leprince-Ringuet (@daphneleprince) reports, “In what has been hailed as a computing milestone, a team of researchers from the University of Science and Technology of China has achieved quantum supremacy thanks to a device that can manipulate tiny particles of light.”[3] That begs the question: What is quantum supremacy? Technology writer Kevin Hartnett (@KSHartnett) explains, “The threshold where quantum computers cross from being interesting research projects to doing things that no classical computer can do is called ‘quantum supremacy’.”[4] So what can’t classical computers do that quantum computers might be able to do? To answer that question, we turn to Professor Richard Feynman, a Nobel Prize-winning physicist who has been credited with coming up with the idea of a quantum computer.

Physicist Joseph John Fernandez notes, “In a [1981] lecture titled Simulating Physics with Computers, Professor Feynman talked about why physicists need computers, and what they require of these devices. … Feynman asked the following question: can a classical, universal computer simulate any physical system? And in particular, what about quantum systems?”[5] Fernandez observes that trying to model quantum systems with a classical computer isn’t possible — hence, the need for a quantum computer. He explains, “For classical computers, the memory requirements for these calculations are too much. The true simulation of physical systems becomes intractable. This is where the interest in quantum computers started to grow.” James Norman explains, “Quantum computers can be game changers because they can solve important problems no existing computer can. While conventional computing scales linearly, QC scales exponentially when adding new bits. Exponential scaling always wins, and it’s never close.”[6] Fernandez concludes, “Professor Feynman was definitely onto something!”

How Chinese scientists use light

Classical computers use bytes which represent either a “1” or a “0”. The Singularity Hub staff explains how quantum computers are different. They write, “Quantum computers calculate using quantum bits, known as qubits. Qubits can be both 1 and 0 simultaneously — meaning they can perform two calculations at once. This is only possible on the smallest scales, where the laws of quantum physics hold sway, and makes for massively faster computing compared to digital computers.”[7] Qubits are created by putting quantum particles in superposition states. In the Chinese case, Jian-Wei Pan and Chao-Yang Lu, scientists at the University of Science and Technology of China, use photons. They have constructed a quantum computer they call Jiuzhang, which takes its name from an ancient Chinese mathematical text.

The Jiuzhang quantum computer uses a new method of manipulating 76 photons to perform its calculations. Shiyin Chen (@schen37), an Editor at Bloomberg News, reports, “Chinese scientists claim to have built a quantum computer that is able to perform certain computations nearly 100 trillion times faster than the world’s most advanced supercomputer, representing the first milestone in the country’s efforts to develop the technology.”[8] How fast does that make the Jiuzhang? According to Leprince-Ringuet, “Jiuzhang achieved Gaussian boson sampling in just 200 seconds, the researchers estimated that the same calculation would take the world’s fastest supercomputer, Fugaku, 600 million years to complete.” Hamish Johnston (@hamishljohn), online editor of Physics World, adds:

“Boson sampling is a way of computing the output of a linear optical circuit that has multiple inputs and multiple outputs. Single photons enter the circuit in parallel and encounter optical components such as beam splitters. Due to their bosonic nature, if two photons arrive at a beam splitter at the same time, they will both follow the same path. This property makes it extremely difficult to use a conventional computer to calculate the output of the circuit even for modest numbers of input photons and output channels. While boson sampling is difficult to do and requires state-of-the art quantum optics, it should vastly outperform even the most powerful supercomputers.”[9]

Chen observes, “While still in its infancy, quantum computing is seen as the key to radically improving the processing speed and power of computers, enabling them to simulate large systems and drive advances in physics, chemistry and other fields.”

Efforts to develop a functioning, universal quantum computer have been likened to a modern arms race. Countries and companies are involved in the race. Billions of dollars are being spent in these efforts. Countries are investing heavily because they see national security interests at stake. Companies are investing because they see billions of dollars of profits to be made. In addition to aiding research into quantum physics and other scientific fields, quantum computing (and its sister technology — quantum communication) could impact many economic sectors, including energy, finance, healthcare, entertainment, and security.