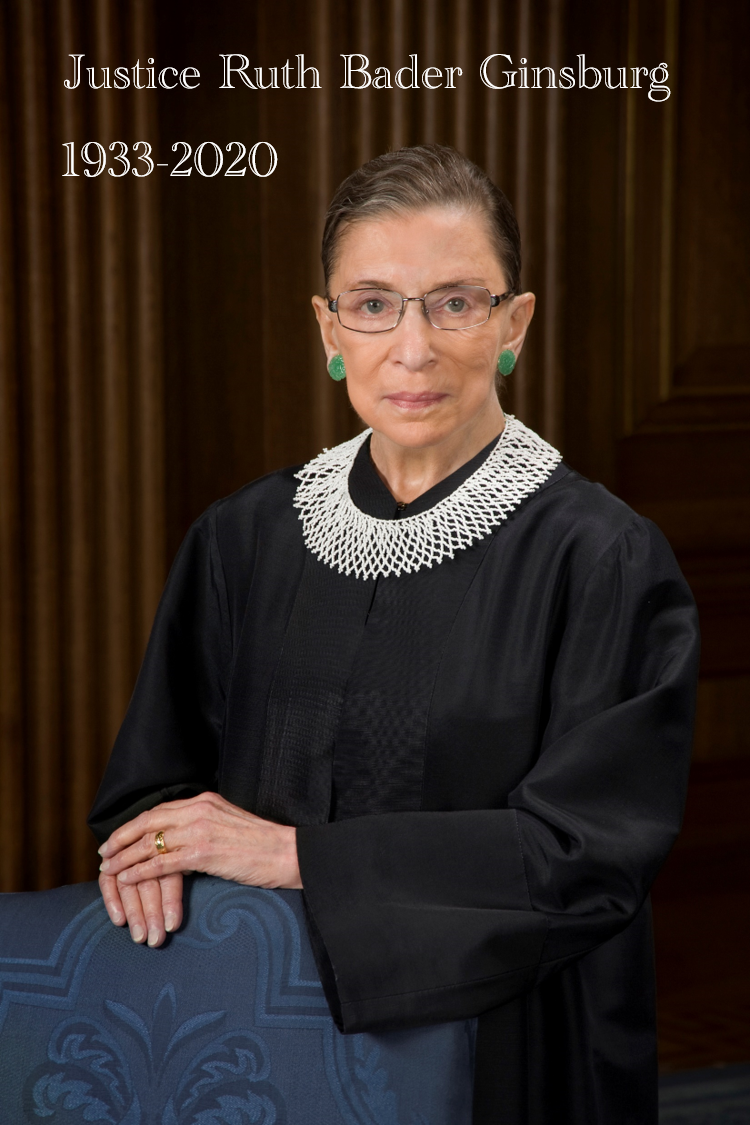 Because of her impact on American society, Ruth Bader Ginsburg (sometimes affectionately referred to RBG) became a cultural icon. She joins a handful of towering government figures who are instantly recognizable only by their initials — like TR, FDR, and JFK. Born in Brooklyn, New York, during the Great Depression, Ruth Bader never attained great physical stature; however, her stature in the field of law was to be unequaled. Her mother died when Ruth was in high school and the loss of her mother seemed to steel her resolve. After graduating from high school, she earned her bachelor’s degree at Cornell University and, a few days after graduation, married Martin D. Ginsburg, who later became an internationally prominent tax attorney, thus becoming Ruth Bader Ginsburg. She put her academic pursuits on hold when her husband was in the military service and they decided to start a family.

When her husband completed military service, she enrolled at Harvard Law School, where she joined a class in which she was one of only few women. According to one source, “She faced gender-based discrimination from even the highest authorities there, who chastised her for taking a man’s spot at Harvard Law.”[1] Nevertheless, she served as the first female member of the Harvard Law Review. During those years, her husband was fighting cancer while also attending Harvard Law School. When he recovered from cancer and graduated, he accepted a position at a New York City law firm. Having a year of law school remaining, Ms. Ginsburg transferred to Columbia Law School to keep her family together. While at Columbia, she also served on the law review. She graduated tied at the top of her class at Columbia Law in 1959. Having faced gender discrimination her entire life, Justice Ginsburg became a great advocate for women’s rights. As her obituary in the Washington Times notes, “Working in the 1970s with the American Civil Liberties Union, Justice Ginsburg successfully argued a series of cases before the high court that strategically chipped away at the legal wall of gender discrimination, eventually causing it to topple.”[2]

In 1963, she accepted a job as a professor at Rutgers University Law School, a position she held until 1972 when she accepted a teaching offer from Columbia University. About the same time, she co-founded and directed the Women’s Rights Project of the American Civil Liberties Union. As one source notes, “Ginsburg took a broad look at gender discrimination, fighting not just for the women left behind, but for the men who were discriminated against as well.”[3] At Columbia, she became the first female professor to earn tenure. She held her Columbia professorship until 1980, when she accepted President Jimmy Carter’s appointment to the U.S. Court of Appeals for the District of Columbia. She served on the court for thirteen years until 1993, when Bill Clinton appointed her to the Supreme Court of the United States, only the second woman to be appointed to the highest court. Edith Roberts, who clerked for Justice Ginsburg when she served on the appellate court, wrote of her, “A natural-born judge, she was not at all judgmental.”[4]

As proof of that point, Justice Antonin Scalia became her closest colleague on the Supreme Court, despite their obvious ideological differences. The Washington Post obituary notes, “When she was named one of Time magazine’s 100 most influential people in 2015, her colleague and improbable close friend, conservative Justice Antonin Scalia, wrote about her dual roles as crusader and judge. ‘Ruth Bader Ginsburg has had two distinguished legal careers, either one of which would alone entitle her to be one of Time’s 100,’ wrote Scalia, who died in 2016.” The ability to engage in rigorous intellectual debate, but not indulge in inflammatory rhetoric and insults, may be a skill of generation gone by; however, it was a hallmark of Justices Ginsburg and Scalia. The two Justices used dine and attend opera together. Her New York Times’ obituary notes, “Harvard gave her an honorary degree in 2011 at a ceremony during which Plácido Domingo, another honorary degree recipient that year, addressed her in song. Justice Ginsburg, an opera devotee, called it one of the greatest experiences of her life.”[5]

When she was nominated to the Supreme Court, she was considered a moderate — having been suggested to Janet Reno by Republican Senator Orrin Hatch. Eventually, however, she found herself firmly in the liberal wing of the court. As the New York Times obituary states, “Justice Ginsburg’s pointed and powerful dissenting opinions … attracted growing attention as the court turned further to the right.” Journalist and lawyer Adam Liptak notes, however, “On the court her notable victories were few. As she put it in a 2013 interview in her chambers, she was fully engaged in her work as the leader of the liberal opposition on what she called ‘one of the most activist courts in history.'”[6]

Justice Ginsburg’s New York Times’ obituary observes, “Her late-life rock stardom could not remotely have been predicted in June 1993, when President Bill Clinton nominated the soft-spoken, 60-year-old judge.” Nevertheless, her “late-life rock stardom” was justly deserved. Regardless of where you fall on the political spectrum, you must recognize and appreciate her keen intellect and sincere desire to advance human rights. The old adage “good things come in small packages” certainly applies in the case of Justice Ginsberg. When Enterra Solutions® board member Benn Konsynski learned of Justice Ginsburg’s passing, he sent me the following poem by Maya Angelou entitled “When Great Trees Fall.” It’s a fitting tribute to Justice Ginsburg.

When great trees fall,
rocks on distant hills shudder,
lions hunker down
in tall grasses,
and even elephants
lumber after safety.

When great trees fall
in forests,
small things recoil into silence,
their senses
eroded beyond fear.

Great souls die and
our reality, bound to
them, takes leave of us.
Our souls,
dependent upon their
nurture,
now shrink, wizened.
Our minds, formed
and informed by their
radiance, fall away.
We are not so much maddened
as reduced to the unutterable ignorance
of dark, cold
caves.

And when great souls die,
after a period peace blooms,
slowly and always
irregularly. Spaces fill
with a kind of
soothing electric vibration.
Our senses, restored, never
to be the same, whisper to us.
They existed. They existed.
We can be. Be and be
better. For they existed.

In announcing her death, the Supreme Court spoke through its Chief Justice, John Roberts, who stated, “Our nation has lost a jurist of historic stature. We, at the Supreme Court, have lost a cherished colleague. Today we mourn, but with confidence that future generations will remember Ruth Bader Ginsburg as we knew her — a tireless and resolute champion of justice.”[7] Justice Ginsburg was truly a great soul and she literally gave her life for her country. She will be missed.