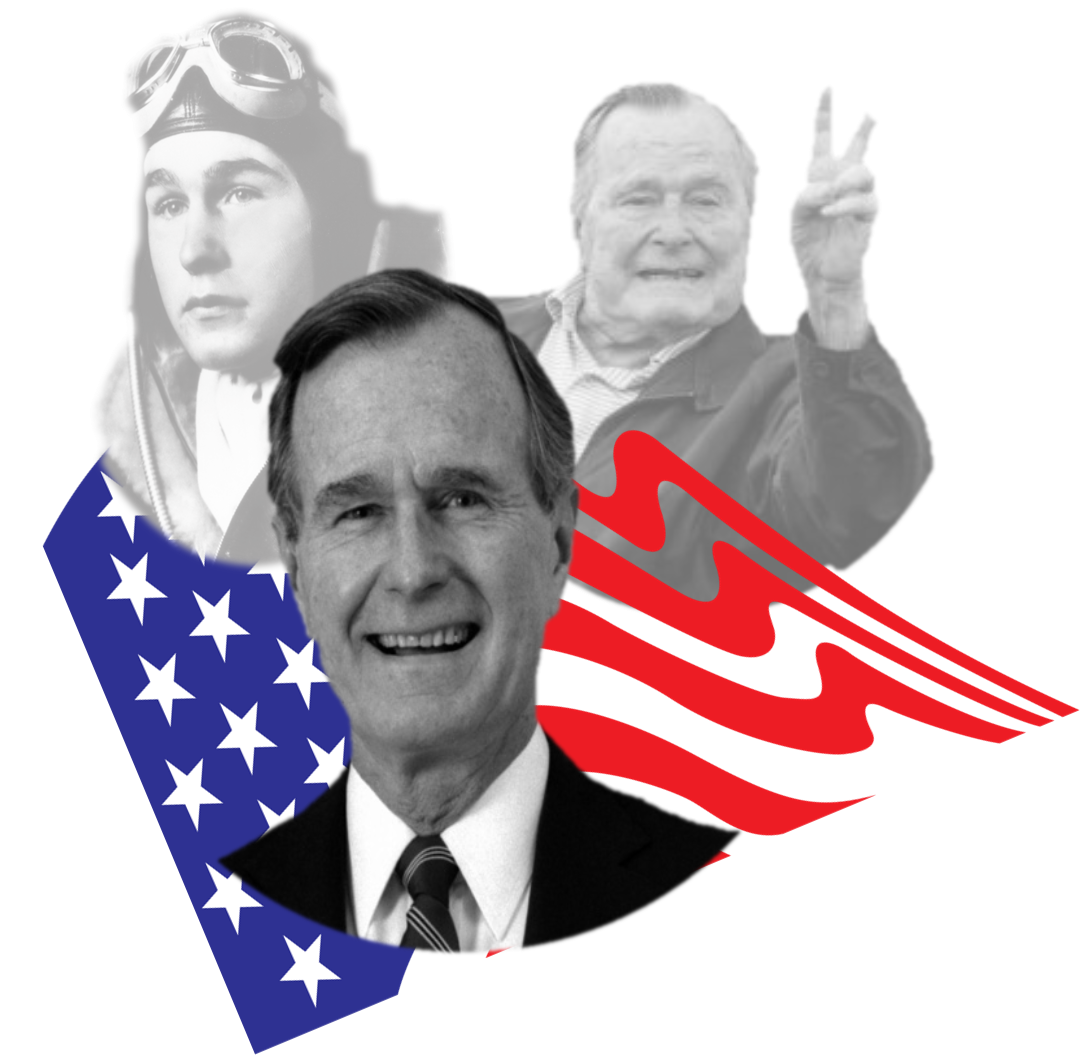 Today, and in the upcoming weeks, we will mourn the passing of one of the greatest modern examples of American Presidential Leadership. I had both the great privilege and honor of campaigning for him during his two campaigns with President Reagan when he was a Vice Presidential candidate and during his two bids for the highest office in the land. Today is, therefore, a bittersweet day for me. A day filled with pride in remembering a great leader and remembering my minor political interactions with his and President Reagan’s campaigns when I was a young man. It is also a sad day that marks the passing of an era in Presidential Leadership highlighted by President Bush’s skilled and gracious statesmanship.

President Bush was a great man. He was a strong, yet compassionate leader, whose humble character, civility, dignity, and grace embodied all that was good and inspiring in an American President. He was a skilled statesman par excellence who helped the world transition through the end of the cold war. And he did so with neither incident nor disaster — steering the world through stormy times that could have easily darkened the world without his leadership. He put country before self, he gave more than he took, he gave credit to others and did not self-aggrandize. He inspired all who knew him or knew about him. He was an inclusive president, compassionate for those in need and he saw the United States as a Shining City on a Hill — a place where people from around the world could seek a better life for themselves and their families.

Few, if any, men have been better prepared to serve as President of the United States than George Herbert Walker Bush. President Bush was the last of the great patricians, who, having achieved worldly success, dedicated his life to public service. Born to wealth and graduating from Yale, he became a decorated naval aviator during the Second World War. During one battle against the Japanese fleet in the Pacific, his plane was shot down. For four hours he watched the battle unfold while bobbing in a life raft waiting to get rescued.

After a successful career in the Texas oil business, President Bush ventured into politics. His first attempt to win political office came in 1964 when he unsuccessfully ran for the United States Senate. Undeterred, he was elected to Congress in 1966, where he served for two terms. In 1970, he again ran unsuccessfully for the U.S. Senate. In the succeeding years, and before he ran for President, Mr. Bush served as the U.S. Ambassador to the United Nations, Chairman of the Republican Party, Chief of the U.S. Liaison Office in the People’s Republic of China, and Director of the Central Intelligence Agency. In 1980, he unsuccessfully campaigned for President; but, his service, stature, and qualifications didn’t go unnoticed. The successful Republican candidate, Ronald Reagan, asked him to be his Vice Presidential running mate. The Reagan/Bush team won and served two terms.

In 1988, he decided to once again try for the Presidency. His odds were long. No serving Vice President had successfully won the Presidency since Martin Van Buren in 1836. In politics, like in business, timing is everything and President Bush’s tenure would be plagued by a struggling economy and the first Gulf War. Knowing people were having a difficult time, he encouraged citizens to help one another. He stressed voluntary service as a means of solving some of America’s most serious social problems and referred to NGOs as a “thousand points of light.” In his 1989 inaugural address, President Bush stated, “I have spoken of a thousand points of light, of all the community organizations that are spread like stars throughout the Nation, doing good.” Four years later, he would refer to this Points of Light Movement as “the soul of America.” He thanked people who thought of others as much as themselves. He stated, “They are ordinary people who reach beyond themselves to touch the lives of those in need, bringing hope and opportunity, care and friendship. By giving so generously of themselves, these remarkable individuals show us not only what is best in our heritage but what all of us are called to become.” That summed up President Bush’s heart pretty well.

Despite running a tough campaign against, Bill Clinton, Mr. Bush lost his bid for a second term. Losing is never easy; but, even in defeat President Bush demonstrated his character and grace. He left a note in the Oval Office for the incoming President. It read:

When I walked into this office just now I felt the same sense of wonder and respect that I felt four years ago. I know you will feel that, too. I wish you great happiness here. I never felt the loneliness some Presidents have described. There will be very tough times, made even more difficult by criticism you may not think is fair. I’m not a very good one to give advice; but just don’t let the critics discourage you or push you off course. You will be our President when you read this note. I wish you well. I wish your family well. Your success now is our country’s success. I am rooting hard for you.

To many peoples’ surprise, Mr. Bush and Mr. Clinton became good friends and they worked together promoting numerous good causes. In a Washington Post op-ed penned after the announcement of President Bush’s passing, President Clinton wrote:

“He was an honorable, gracious and decent man who believed in the United States, our Constitution, our institutions and our shared future. And he believed in his duty to defend and strengthen them, in victory and defeat. He also had a natural humanity, always hoping with all his heart that others’ journeys would include some of the joy that his family, his service and his adventures gave him. … I just loved him. … Though he could be tough in a political fight, he was in it for the right reasons: People always came before politics, patriotism before partisanship. To the end, we knew we would never agree on everything, and we agreed that was okay.”

In his Inaugural Address, President Bush stated, “America today is a proud, free nation, decent and civil — a place we cannot help but love. We know in our hearts, not loudly and proudly but as a simple fact, that this country has meaning beyond what we see, and that our strength is a force for good.” He was saddened that civility seems no longer to have a place in politics or public discourse.

Despite his many achievements, I believe Mr. Bush would like best to be remembered as a good husband, father, grandfather, and great-grandfather. For those of us outside of his family, he should be remembered as a gentleman, a statesman, and a President who honored the position he held and faithfully served the country and people he loved. At the 1988 Republican National Convention, Mr. Bush told the delegates, “I am a man who sees life in terms of missions — missions defined and missions completed.” Rest in peace, Mr. President, your mission is now complete. Thank you once again for the honor of working with and for your presidential campaigns and those with President Reagan.