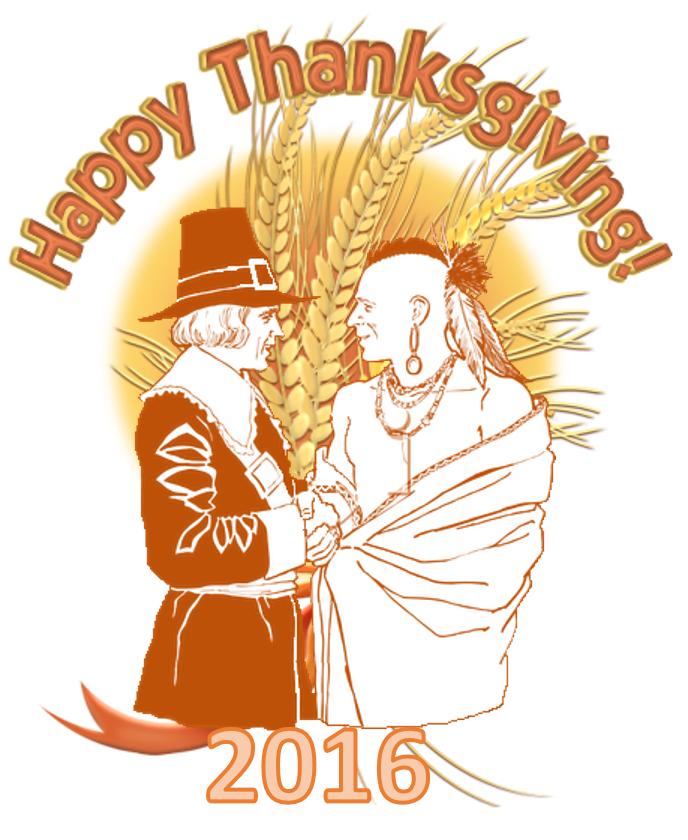 Today we celebrate Thanksgiving Day in the United States. High on the list of things for which Americans are thankful is the end of the presidential election campaign. Fortunately, Thanksgiving is better known for savory meals than for unsavory politics. The origins of Thanksgiving celebrations in America are traditionally traced back to the Pilgrims who fled religious persecution in England hoping to find peace and happiness in America. It’s unclear whether the Pilgrims knew the hardships they would face during their earliest years. What is clear is they wouldn’t have survived without the help of Native Americans, who taught them how to hunt and grow crops. It’s miraculous any Native Americans were willing to help these refugees considering events leading up to the Pilgrims arrival in 1621. That story is best told by relating the life struggle of one of those Native Americans; a man named Tisquantum (better known as Squanto).

Tisquantum was a member of the Patuxet tribe, which belonged to the Wampanoag Confederation. He is best known for being an interpreter and guide for the Pilgrims during their first winter in the New World. We know little of early years and can only hope they were filled with happiness, because much of his life was not. Historians pick up his story seven years before the Pilgrims arrived in what is now the Commonwealth of Massachusetts. In that year, Captain John Smith (an explorer famously rescued by Pocahontas a few years earlier) arrived to map Cape Cod and other New England coastal areas.[1] One of Smith’s cohorts was a despicable man named Thomas Hunt, whom Smith later called dishonest and inhumane for kidnapping, enslaving, and selling Native Americans.

Some of Hunt’s victims were rescued by Spanish Friars and instructed in the Christian faith. Tisquantum was one of the luckier victims. He somehow found his way to England where he began living with and working for John Slaney, treasurer of the Newfoundland Company. Living in London, Tisquantum began to learn the English language. Assuming Tisquantum was an expert on North American natural resources, Slaney provided him passage on a ship to New World in exchange for his services as an interpreter. In 1618, that ship eventually made its way down the eastern coast of America to his native land. Eric Metaxas (@ericmetaxas) writes, “After 10 years, Squanto returned to the village where he had been born. But when he arrived, to his unfathomable disappointment, there was no one to greet him.”[2]

Like previous tragedies resulting from the meeting of Old and New World populations, epidemics of newly introduced diseases wiped out much of Tisquantum’s people. Although his kidnapping was criminal and contemptible, it may have saved Tisquantum’s life. Metaxas describes what happened next:

“Eventually [Squanto] lived alone in the woods. But his story didn’t end there. In the bleak November of 1620, the Mayflower passengers, unable to navigate south to the warmer land of Virginia, decided to settle at Plymouth, the very spot where Squanto had grown up. They had come in search of religious freedom, hoping to found a colony based on Christian principles. Their journey was very difficult, and their celebrated landing on the frigid shores of Plymouth proved even more so. Forced to sleep in miserably wet and cold conditions, many of them fell gravely ill. Half of them died during that terrible winter. One can imagine how they must have wept and wondered how the God they trusted and followed could lead them to this agonizing pass. They seriously considered returning to Europe. But one day during that spring of 1621, a Wampanoag walked out of the woods to greet them. Somehow he spoke perfect English. In fact, he had lived in London more recently than they had. And if that weren’t strange enough, he had grown up on the exact land where they had settled. Because of this, he knew everything about how to survive there; not only how to plant corn and squash, but how to find fish and lobsters and eels and much else. The lone Patuxet survivor had nowhere to go, so the Pilgrims adopted him as one of their own and he lived with them on the land of his childhood.”

Unfortunately, Tisquantum’s story takes a dark turn. His “unique knowledge of the English language and English ways gave him power. He sought to increase his status among other native groups by exaggerating his influence with the colonists and even going so far as to tell them that the English had storage pits containing the plague and would release it if they didn’t do what he wanted.”[3] Caleb Johnson reports that Tisquantum’s extortion and threats did not sit well with Massasoit, leader of the Wampanoag Confederacy.[4] He writes:

“When Massasoit learned that Squanto was abusing his power and deceiving for personal gain, he ordered the Pilgrims to turn him over for punishment (death). The Pilgrims were obligated to do so, by the peace treaty they had signed: but at the same time they realized that the survival of their Colony depended on communication with the Indians. But Massasoit had called their hand, and William Bradford was minutes away from turning Squanto over for execution, when a ship came onto the horizon. Not knowing whether it was friend or foe, and even suspecting that perhaps the Indians were in conspiracy with the French, Bradford refused to turn over Squanto until the identity of the ship was discovered. The ship turned out to be the Fortune, and for Squanto it was very good fortune it arrived. The new settlers, the shortage of food, and the oncoming winter distracted from other events. Then as spring came, new settlers showed up to found another colony, at Wessagussett: and they had all kinds of problems with the Indians that required Squanto’s interpreting skills. Massasoit, though clearly disappointed and frustrated, did not bother asking for Squanto’s life again.”

Although Tisquantum’s life had been spared, it did not have a fairy tale ending. In the fall of 1622, while acting as a guide and interpreter for Governor Bradford, Tisquantum came down with a fever and died. Tisquantum clearly had his faults; but, Governor Bradford wrote in his journal that Tisquantum was “a special instrument sent of God” who didn’t leave them “till he died.” Just as Tisquantum blessed the lives of the Pilgrims, each of us has people in our lives to whom we owe a debt of gratitude. Like Tisquantum, they may not be perfect, but we should appreciate them nevertheless. The late William Arthur Ward once wrote, “Gratitude can transform common days into thanksgivings, turn routine jobs into joy, and change ordinary opportunities into blessings.” Tisquantum managed to turn his kidnapping and enslavement into opportunities that blessed many lives. We should all strive to bless the lives of those around us, as imperfect as we are. You never know what your small efforts might mean to someone else. From all of us at Enterra Solutions®, we hope you have a happy Thanksgiving.