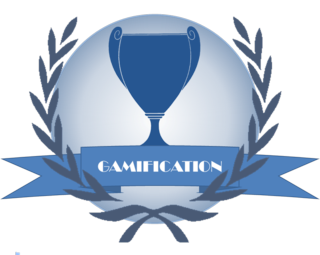 Gamification and the Future

According to Wikipedia, “Gamification is the use of game thinking and game mechanics in a non-game context in order to engage users and solve problems.” The staff at Mashable adds:

“Typically gamification applies to non-game applications and processes, in order to encourage people to adopt them, or to influence how they are used. Gamification works by making technology more engaging, by encouraging users to engage in desired behaviors, by showing a path to mastery and autonomy, by helping to solve problems and not being a distraction, and by taking advantage of humans’ psychological predisposition to engage in gaming. The technique can encourage people to perform chores that they ordinarily consider boring, such as completing surveys, shopping, filling out tax forms, or reading web sites. Available data from gamified websites, applications, and processes indicate potential improvements in areas like user engagement, ROI, data quality, timeliness, or learning.”

It should be clear from those descriptions that gamification can be used in any number of situations and in any number of domains. For example, gamification is one of five technologies predicted to improve education in the years ahead. According to one website, gamification in education will include: educational programming tools, educational games, achievements & badges, student-developed applications, and self-paced learning modules. Mother of three and founder of TechMamas.com, Beth Blecherman, is a strong believer that gamification has a place in the classroom. She claims to have witnessed “first-hand how making activities into a game suddenly turns stubborn stand-offs into engaging fun.” [“Does Gamification Help Classroom Learning?” Mashable, 8 March 2013] She doesn’t claim that gamification is the be-all and end-all for learning, but insists that it is a valuable tool in education’s kit. She explains:

“Engagement is key. If my kids aren’t enjoying a learning environment, whether it’s in school, summer camp or a sports team, I hear about it very quickly. In our house, Little League is all about how the kids and the coaches all gel together, and not necessarily about the game itself. … How does this all translate to the classroom? It looks like the way to get kids to learn during ‘game play’ is by engaging them to investigate a topic, not just play to earn points. It’s also important to understand why. For some kids, this type of learning may be more effective than traditional classroom lectures. For my kids, the answer is ‘yes’ but it won’t work for everyone.”

Imagining the use of games in an educational environment is not that hard to do. After all, most kids love to play games. But it’s not just kids that love to play games. The fact of the matter is most people love to play games throughout their lives. The type and level of sophistication of those games may change; but, the satisfaction we gain from playing them apparently remains fairly constant throughout life. That is why Sam Laird writes, “From recycling, to personal health, to corporate culture, gamification is seeping into all aspects of everyday life.” [“Why Gamification Can’t Be Stopped,” Mashable, 7 April 2012] Rajat Paharia, founder of company called Bunchball, which helps company use gamification, told Laird, “Gamification is all about providing sustained user engagement. The word itself implies a transformation of something that exists, and people are starting to see more and more how they can apply it to their own situations.”

Gabe Zichermann, founder of Dopamine, a strategic consultancy specializing in engagement science, claims that startup companies primarily use gamification to acquire customers. [“The Game Mechanics of Customer Loyalty,” Mashable, 24 May 2012] Zichermann notes that gamification doesn’t necessarily have to take the form of something that looks like a game. Gamification is a call to action. He explains:

“Think of the top five social actions you want your users to take, and use verbs to describe them. Don’t use ‘buy’ or ‘subscribe’ because those are outgrowths of good engagement rather than ends in and of themselves. Concepts such as ‘like,’ ‘comment,’ ‘argue,’ or ‘challenge’ are good examples. It’s critical to think of them as social actions because they will also help you attract new users.”

Using gamification for the purposes of marketing is a fairly well known technique. Most of us have received emails offering us the opportunity to join a contest or something similar. Sharlyn Lauby believes that companies should also look internally for ways to use gamification. She writes, “An example would be to create a game to learn something new for work: While a lecture session could potentially turn off employees and prevent learning, a game that teaches the same skills could lead to an interested employee that is eager to learn.” [“The Evolution of Gamification in the Workplace,” Mashable, 15 June 2012] She continues:

“Companies need to embrace the idea of blending games with work. And in order for that to happen, gamification needs to be perceived as a profession, not a frivolous activity. Proper gamification must have a minimum knowledge base and skill set about the given subject matter, as well as both theory and practical application of its core principles. Lastly, it must create a common vehicle for advocacy and ethics to maintain standards.”

Lauby assumes that most workplace gamification activities will involve IT technologies. The reason for that assumption is the fact that the “number of people playing video games in the U.S. has risen 241% since 2008.” That means that most employees are already familiar with some of the technologies they will be asked to use as part of their training. This familiarity enhances the prospects for success and reduces training costs. Since so many sectors are starting to adopt gamification, Lauby concludes, “While some aspects of gamification are still evolving, there’s clearly a vibrant future ahead for the profession.” In a follow-on article, Lauby notes, “Often the hardest part of introducing games into the workplace isn’t the game itself; it’s selling the idea to senior leadership.” [“Give Your Business a Boost With Games in the Workplace,” Mashable, 27 July 2012] She goes on to note that once they see the results, most executives are convinced. She concludes, “Whether it’s brand awareness, recruitment or high performance, companies are using gamification in varied forms to accomplish their business goals.”

Another use of gamification in the workplace focuses on innovation. According to the staff at Market, “Gamification will be used for innovation by 50% of companies and will become as important as Facebook for customer retention, Gartner predicts.” [“50% of companies will gamify innovation by 2015,” 18 February 2013] According to the article, Gartner identified “four principal means of driving engagement using gamification.” They are:

1. Accelerated feedback cycles: Gamification increases the velocity of feedback loops, such as annual performance reviews, to maintain engagement over time.

3. A compelling narrative: While real-world activities are rarely compelling, gamification builds a narrative that engages players to participate and achieve the goals of the activity.

Other analysts indicate that gamification, when partnered with big data analytics, can be used to address security and fraud challenges. [“How Big Data Analytics and Gamers Could Solve Fraud and Security,” by Heong Weng Mak, Gamification Corp., 29 March 2013] “When a system is constructed,” writes Mak, “whether it is an online game or within an enterprising organization, raw data is constantly generated by its users’ actions and stored onto servers. When these vast quantity of unstructured data are compiled and analyzed through analytical programs, amazing things begin to happen.” One of those “amazing things” is the ability to discover whether an individual is “gaming” the system. People who game any system create problems for the rest of us and generally end up costing us money because we have to cover the costs of fraud.

Because people like to play games, the gamification of all sorts of activities is likely to happen over the next few years. Clearly, however, marketers will embrace gamification. They are always looking for new and exciting ways to engage with consumers.