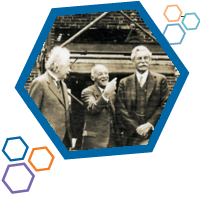 Eliza Gray tells the fascinating story of The Institute for Advanced Study in an article published in Time. [“The Original Genius Bar,” 22 July 2013] She describes the Institute as “a place to work unhindered by the pesky objectives required by traditional research centers or obligations to pimply students at universities. If research were measured on a spectrum from the practical (like making a laptop slimmer) to the theoretical (like studying the way matter moves in space), the institute is as ‘close to the frontier as possible,’ says its new director, Dutch mathematical physicist Robbert Dijkgraaf.” Since opening its doors in 1930, Gray reports that “33 Nobel laureates have stopped through along with more than two-thirds of the winners of the Fields Medal, math’s top honor since 1936.” According to the article, the Institute was founded “by Abraham Flexner, an educational theorist, and siblings Louis Bamberger and Caroline Bamberger Fuld, department-store moguls who provided the initial endowment of $5 million.” Gray indicates that their motivation for founding the Institute was “to counteract a trend in the U.S. toward applied science.” There is certainly nothing wrong with applied science; but, seeking to expand basic scientific knowledge (i.e., “pursuing questions for which the value of the answers isn’t obvious”) taps something deep in soul of scientific and mathematical geniuses.

Gray concludes her article on the Institute by describing some of the work currently ongoing there, including work on machine learning, cancer, human migration patterns, and star explosions. No one is sure where all of the research will lead, but as one researcher told Gray, “Use your imagination.” To put an exclamation point on the fact that the Institute remains relevant and important, it was recently announced that theoretical physicists from the Institute “a jewel-like geometric object that dramatically simplifies calculations of particle interactions and challenges the notion that space and time are fundamental components of reality.” [“A Jewel at the Heart of Quantum Physics,” by Natalie Wolchover, Quanta Magazine, 17 September 2013] To learn more about that, read my post entitled Are Space and Time Real?

As you read Gray’s article, you can sense the excitement she felt as she interviewed those involved with the Institute. It is that sense of excitement and inquisitiveness that a new non-profit organization, called The Project for STEM Competitiveness – which I helped found and currently serve as chairman of – wants to instill in young students. The first project being sponsored by The Project for STEM Competitiveness is a pilot program in Newtown, PA, at the Newtown Friends School called “Liftoff to Mars.” To read more about this program, read my post entitled Teaching STEM Subjects Using a Mission to Mars and the following articles: “Newtown Friends to pilot STEM education program,” by Crissa Shoemaker DeBree, phillyBurbs.com, 24 September 2013; “STEM pilot program lifts off at Newtown Friends School,” by Regina Young, Bucks County Herald, 3 October 2013; and “Newtown Friends School, Lockheed Martin, US Dept. of Energy thinking about life on Mars,” by Cary Beavers, The Advance, 3 October 2013.

You might be asking: What does the Institute for Advanced Study have to do with a science, technology, engineering, and mathematics (STEM) education initiative at a Newtown, PA, middle school? The primary connection is geographic. The Institute, along with several other world-class academic and research organizations, lies within a ten-mile radius of Newtown – which also happens to be the headquarters of my company Enterra Solutions, LLC. It is our intention to sponsor field trips to these world-class organizations so that students can feel for themselves the excitement that research can engender. Fuld Hall of the Institute of Advanced Studies As I mentioned above, The Institute for Advanced Studies is just one of the many world-class organizations that lie within about a ten-mile radius of Enterra Solutions’ headquarters. One such organization is the Princeton Plasma Physics Laboratory. It was during a visit with Dr. Andrew Zwicker, Head of Science Education at PPPL, that I first discussed establishing The Project for STEM Competitiveness. As explained by its website, “The U.S. Department of Energy’s Princeton Plasma Physics Laboratory (PPPL) is a collaborative national center for fusion energy research. The Laboratory advances the coupled fields of fusion energy and plasma physics research, and, with collaborators, is developing the scientific understanding and key innovations needed to realize fusion as an energy source for the world. An associated mission is providing the highest quality of scientific education.”

Another such organization is the SRI International, which began life as the David Sarnoff Research Center, a research and development organization specializing in vision, video and semiconductor technology. Named for David Sarnoff, the former visionary leader of RCA and NBC, the organization has been involved in several historic developments that will grab students’ attention, notably color television, CMOS integrated circuit technology, liquid crystal displays, and electron microscopy. The organization invented the now ubiquitous computer mouse, was one of the first four sites of ARPANET, the predecessor to the Internet, developed the SIRI personal assistant that iPhone users are familiar with, and it even helped Walt Disney select a location for his first theme park.

And, of course, there is Princeton University. As its website explains, “Chartered in 1746, Princeton is the fourth-oldest college in the United States. Princeton is an independent, coeducational, nondenominational institution that provides undergraduate and graduate instruction in the humanities, social sciences, natural sciences and engineering. As a world-renowned research university, Princeton seeks to achieve the highest levels of distinction in the discovery and transmission of knowledge and understanding. At the same time, Princeton is distinctive among research universities in its commitment to undergraduate teaching.”

With all of these wonderful organizations with such rich histories residing in our own backyard, it seemed natural to me to reach out to them for assistance in helping make STEM subjects for interesting for young students. If researchers at these institutions can get young students excited about STEM subjects, I’m not sure what will. However, I’m optimistic that field trips and visits by guest lecturers from these organizations will help stimulate students and, with luck, foster a genius or two among them.