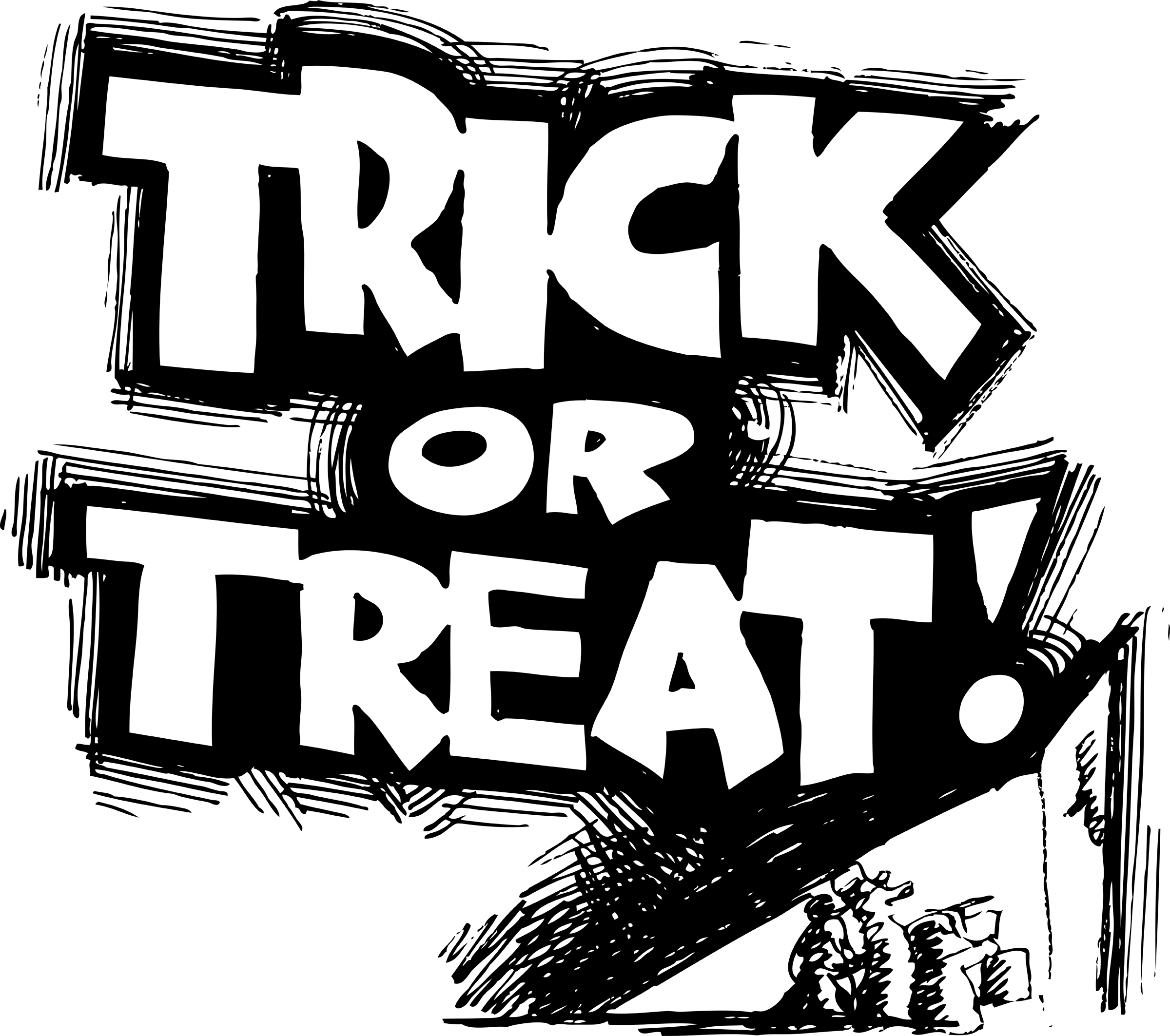 Forget the Tricks; Halloween is all about the Treats

Tonight many a little goblin will knock on neighborhood doors and loudly ask, “Trick or treat?” Few of them will actually have tricks up their sleeves waiting to be revealed should a treat not appear. That hasn’t always been the case. Author and Halloween expert Lesley Bannatyne explains, “Halloween in early 19th-century America was a night for pranks, tricks, illusions, and anarchy. Jack-o’-lanterns dangled from the ends of sticks, and teens jumped out from behind walls to terrorize smaller kids. Like the pumpkin patches and pageants that kids love today, it was all in good fun — but then, over time, it wasn’t. As America modernized and urbanized, mischief turned to mayhem and eventually incited a movement to quell what the mid-20th-century press called the ‘Halloween problem’ — and to make the holiday a safer diversion for youngsters. If it weren’t for the tricks of the past, there’d be no treats today.”[1] She goes on to describe some of the Halloween mayhem created in the past:

“Halloween was born nearly 2,000 years ago in the Celtic countries of northwestern Europe. November 1 was the right time for it — the date cut the agricultural year in two. It was Samhain, summer’s end, the beginning of the dangerous season of darkness and cold — which according to folklore, created a rift in reality that set spirits free, both good and bad. Those spirits were to blame for the creepy things — people lost in fairy mounds, dangerous creatures that emerged from the mist — that happened at that time of year. Immigrants from Ireland and Scotland brought their Halloween superstitions to America in the 18th and 19th centuries, and their youngsters — our great- and great-great grandfathers — became the first American masterminds of mischief. Kids strung ropes across sidewalks to trip people in the dark, tied the doorknobs of opposing apartments together, mowed down shrubs, upset swill barrels, rattled or soaped windows, and, once, filled the streets of Catalina Island with boats. Pranksters coated chapel seats with molasses in 1887, exploded pipe bombs for kicks in 1888, and smeared the walls of new houses with black paint in 1891. Two hundred boys in Washington, D.C., used bags of flour to attack well-dressed folks on streetcars in 1894.”

As America became more urbanized, the pranks became more serious, sinister, and dangerous. Bannatyne notes, “The effort to restrain and recast the holiday continued after World War II, as adults moved Halloween celebrations indoors and away from destructive tricks, and gave the holiday over to younger and younger children. … Of course, the real solution was already gaining in practice by that time. Since there were children already out demanding sweets or money, why not turn it into it a constructive tradition? Teach them how to politely ask for sweets from neighbors, and urge adults to have treats at the ready. The first magazine articles detailing ‘trick or treat’ in the United States appeared in The American Home in the late 1930s.” Today, the treats far outnumber the tricks on Halloween night.

All about the treats

Halloween has become one of the most celebrated American holidays. Jessica Dumont (@JLDumont6) reports, “An estimated 175 million Americans are gearing up for Halloween festivities this year.”[2] For participating children, it all about the treats. Dumont reports, “Candy is a key driver for the holiday.” She cites a survey conducted by the National Retail Federation which found “95% of consumers plan to purchase Halloween candy, with total spending on goodies estimated to reach $2.6 billion. About 70% of people celebrating Halloween plan to hand out candy, and 30% will take their children trick-or-treating.” Halloween treats don’t just find their way into Jack-o-lantern buckets or pillowcases (used by the most ambitious trick-or-treaters), they also find themselves featured at adult Halloween events.

The rest of the story

Part of the fun providing and eating Halloween sweets is the atmosphere in which such activities take place. Last year Americans spent a record $9.1 on sweets, decorations, and costumes. Daphne Howland (@daphnehowland) reports, “Total spending for Halloween will stay about the same as last year, according to the National Retail Federation’s annual survey conducted by Prosper Insights & Analytics. It will reach $9 billion, the second highest in the survey’s 14-year history, just missing last year’s record $9.1 billion in sales.”[4] How will that money be spent? Michael Brown, a research analyst at LendEDU, provided me with the following updates: “The average American will spend $185.50 on Halloween in 2018. This figure is up from last year ($169.81). Within that total expenditure, $76.05 (41%) will go towards candy, $66.78 (36%) will go towards costumes, and $42.67 (23%) will go towards decorations.”[5] Seasonal haunted houses and theme parks are also on the rise as are Halloween parties. Howland writes, “Thanks to a robust economy, retailers have little to fear on Halloween this year. … Around 48% of Americans plan to wear a costume, with additional spending taking place on a range of activities … with half planning to decorate their home or yard, 45% carving a pumpkin, 32% throwing or attending a party and 21% braving a haunted house.”

Dumont concludes, “Despite consumer attitudes trending toward healthier snacks and away from sugar, as well as retailers’ efforts to meet those demands, people seem to make exceptions for holiday candy consumption. Attribute it to nostalgia or a higher tolerance of sugar for a special occasion, but holidays including Valentine’s Day, Easter and Halloween are a huge money maker for candy companies and retailers. Given the continued confidence in the economy, shoppers are not showing any signs of slowing down on their candy spending this year.” If you are up for a little mischief with your treats, Bannatyne believes it’s alright to indulge as long as nothing or no one is damaged or hurt. She writes, “Halloween is still seen as a day to cause mischief, to mock authority, and make the haves give to the have-nots — or at least shine a light on the fact that they should. For that, Americans can thank the long line of pranksters who came before us.” And, if you’re feeling a bit naughty, she writes, “[There’s] an annual Naked Pumpkin Run in Boulder, Colorado.” For most us, however, it’s all about the candy. Brown concludes, “No one wants to be that one house in the neighborhood that is known for not giving out candy on Halloween, so everybody reaches into their pocket to buy some to handout to eager trick-or-treaters.”