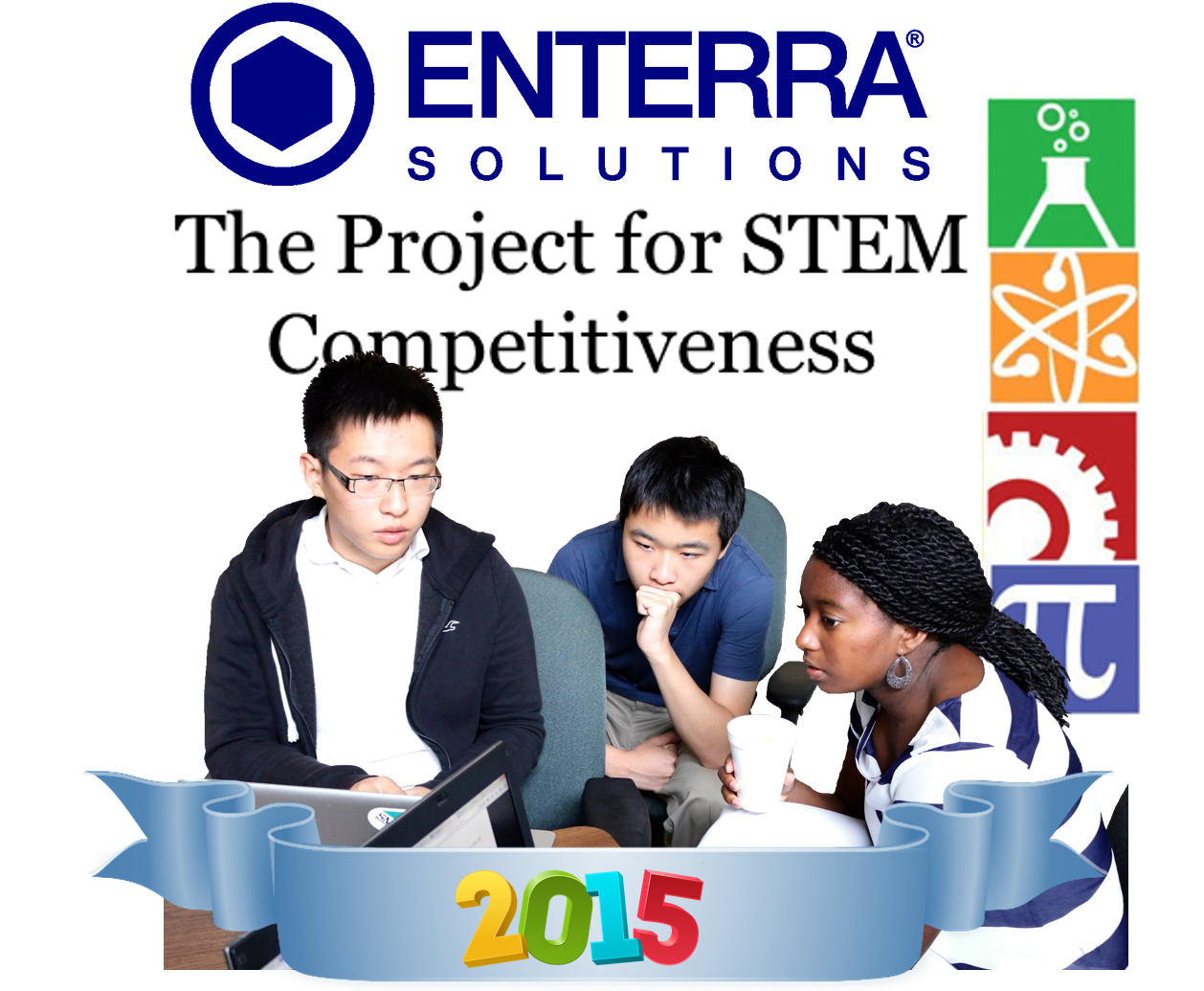 New ideas can come from people of any age. “Benjamin Franklin invented swim flippers when he was 12 years old. Frank Epperson, age 11, conceived of the popsicle, and 16-year-old George Nissen thought up a trampoline. Just last year, Kiowa Kavovit, then 6, became the youngest to pitch her invention—a liquid bandage called Boo Boo Goo—on ABC’s ‘Shark Tank’.”[1] Another young inventor recently highlighted by the Smithsonian magazine is Alexis Lewis, a 15-year-old inventor in Chapel Hill, North Carolina. “Lewis holds a patent for a wheeled travois—a triangular load-carrying device with a bamboo frame and a bed of netting that she designed to serve Somali refugees, who need to transport their children many miles to camps and hospitals.” Interns in a program sponsored by Enterra Solutions® and The Project for STEM Competitiveness are working this summer to join the ranks of young innovators. The thirteen Enterra/PSC interns range in age from 15 to 19. The intensive seven-week program focuses on each intern getting involved with:

For their Data Science Project, interns were divided into three teams based on their skills and experience. The three teams are collaborating on a single, five-week project. The teams are:

The objective of the project is to create a product that will allow a client to analyze a data set of interest through an easy-to-use web app. The interns had to find a free data set and then determine how they could productize, design, develop, test, and deploy an application that leverages the data. Upon completion the teams will present their work to Enterra, which will use the documentation and code produced by the interns to further internal development of data science products. The interns are gaining real-world experience working in a tech company using state-of-the-art technologies on real datasets. In addition, they are learning team-building, business development, product design, and analytical skills.

The project involves creation of a website that people can use to find interesting places in New York City. The user takes a quick survey, and the website uses this information to recommend places that it thinks match the user’s preferences and interests. The interns are working with information from the Google Places API, which provides data on businesses and locations within New York City. They’ve also collected their own data by sending out a survey to determine how a user’s preferences relate to the places he or she enjoys visiting.

In addition to the hands-on training as a result of developing their Data Science Project, the interns will attend two in-house training seminars which will educate them on software skills necessary to perform daily tasks in an office environment (MS Excel, etc.) and on how to build web applications (HTML5, CSS, JavaScript).

All team members will attend a week-long session at the Science Education Department of the Princeton Plasma Physics Lab (PPPL). At PPPL team members will be given a unique opportunity to work at a U.S. National Laboratory on a week-long project that will employ their diverse skill sets. Last year’s interns, for example, helped build a robot arm which moves magnets around a tube in which plasma is produced. The robot arm is now connected to a web server which allows scientists around the world to control the arm and conduct their own plasma physics experiments remotely. Team members will also tour the PPPL facilities, including their plasma reactor sites.

One of the most exciting parts of the Enterra/PSC Intern program involves a lecture series that will expose the interns to some of the finest minds in the world and the ideas they are pursuing. The lectures will be given by leading University Professors, Ph.D. candidates, and business leaders who will come on-site to Enterra to educate the students about Applied Mathematics, Physics, and Engineering. Students will also be invited to visit Princeton University, BMS for a special tour. The speakers include: