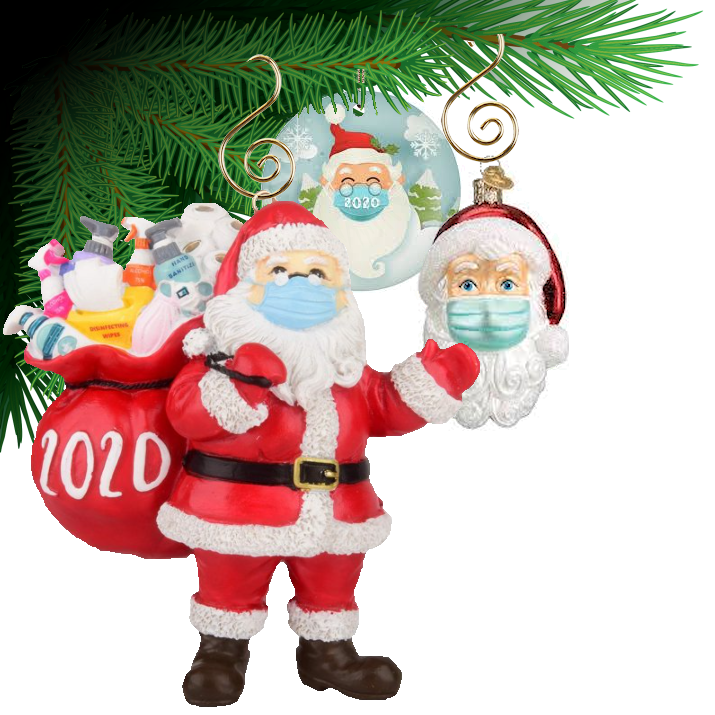 When you look at the array of new Christmas tree ornaments offered this year — everything from Santa wearing a mask to carrying rolls of toilet paper for gifts — you know it’s been a unique year. As Christmas has become more secularized — to appeal to Christians and non-Christians alike — Santa Claus has increasingly become the face of Christmas and its best salesperson. Santa’s elevation to “salesman of the year” happened gradually. His story began over 1600 years ago in a city called Myra, in what is now modern-day Turkey. Back in the early fourth century C.E. he was known as Nicholas, Bishop of Myra. Within a century, he would be known as Saint Nicholas, the giver of gifts.

Nicholas, however, is not the only figure after whom the modern-day Santa Claus is modeled. Santa also draws on mythology from Northern Europe, where, long before Christmas was celebrated, Odin was ruling over a midwinter holiday know as Yule. Yule was celebrated over several days and some of its traditions, like the Yule Log, continue in today’s Christmas celebrations. Yule was a season during which hunts were mounted and Odin delivered gifts. Yule is probably where the tradition of telling ghost stories began. (e.g., Dicken’s “A Christmas Carol”). According to Wikipedia, scholars have connected the month-long event and Yule period to the Wild Hunt — a ghostly procession in the winter sky led by Odin. The Wild Hunt is also accompanied by increased activities of undead beings who walk the earth. By the Middle Ages, another figure based on Saint Nicholas appeared in the Netherlands — Sinterklaas. The Sinterklaas story arose from celebrations associated the feast celebrating the name day of Saint Nicholas on 6 December. The annual feast is accompanied with the gift-giving. In some countries gifts are given on St. Nicholas’ Eve (5 December) and, in other countries, on the morning of 6 December, Saint Nicholas Day. It takes little imagination to see how Sinterklaas became Santa Claus.

Around the same time Sinterklaas was being feted in Europe, Father Christmas became the personification of Christmas in England. To some extent, we have Father Christmas to thank for saving the holiday. According to Wikipedia, “[Father Christmas] was originally part of an unrelated and much older English folkloric tradition. … English personifications of Christmas were first recorded in the 15th century, with Father Christmas himself first appearing in the mid 17th century in the aftermath of the English Civil War. The Puritan-controlled English government had legislated to abolish Christmas, considering it papist, and had outlawed its traditional customs. Royalist political pamphleteers, linking the old traditions with their cause, adopted Old Father Christmas as the symbol of ‘the good old days’ of feasting and good cheer. Following the Restoration in 1660, Father Christmas’ profile declined. His character was maintained during the late 18th and into the 19th century by the Christmas folk plays later known as mummers plays.” Despite Puritan misgivings about Christmas, celebrations continued and “the recognizably modern figure of the English Father Christmas developed in the late Victorian period.”

Over the years, the image of Santa Claus changed. St. Nicholas was depicted in humble traditional clothing. Sinterklaas looked more like a Catholic bishop and Father Christmas dressed in a long, fur-trimmed cloak (sometimes green and sometimes red) wearing a wreath of holly. More modern depictions of Santa Claus can be traced to the U.S. Civil War. History writer Lorraine Boissoneault (@boissolm) explains:

“You could call it the face that launched a thousand Christmas letters. Appearing on January 3, 1863, in the illustrated magazine Harper’s Weekly, two images cemented the nation’s obsession with a jolly old elf. The first drawing shows Santa distributing presents in a Union Army camp. Lest any reader question Santa’s allegiance in the Civil War, he wears a jacket patterned with stars and pants colored in stripes. In his hands, he holds a puppet toy with a rope around its neck, its features like those of Confederate president Jefferson Davis. A second illustration features Santa in his sleigh, then going down a chimney, all in the periphery. At the center, divided into separate circles, are a woman praying on her knees and a soldier leaning against a tree. ‘In these two drawings, Christmas became a Union holiday and Santa a Union local deity,’ writes Adam Gopnik in a 1997 issue of the New Yorker. ‘It gave Christmas to the North — gave to the Union cause an aura of domestic sentiment, and even sentimentality.'”[1]

Both of the drawings described by Boissoneault were drawn by the famous cartoonist Thomas Nast. Nearly twenty years later, in 1881, he drew an iconic picture entitled “Merry Old Santa” that became the standard for all future renditions of the jolly, old elf.

Although Nast’s “Merry Old Santa” looks innocent enough, Ryan Hyman, a curator at the Macculloch Hall Historical Museum, told Boissoneault it was also a picture with a message. Boissoneault explains, “Hyman says, it’s more propaganda, this time related to the government’s indecisiveness over paying higher wages to members of the military. ‘On his back isn’t a sack full of toys — it’s actually an army backpack from enlisted men.’ He’s holding a dress sword and belt buckle to represent the Army, whereas the toy horse is a callback to the Trojan horse, symbolizing the treachery of the government. A pocket watch showing a time of ten ’til midnight indicates the United States Senate has little time left to give fair wages to the men of the Army and Navy. ‘Nast was always pro-military,’ Hyman says. ‘The military was up for getting a raise and he knew how hard they worked and how they helped shape the country.'”

Thomas Nast may have laid the groundwork for the modern image of Santa, but the Coca-Cola company firmly implanted the image in the minds of most Americans. According to the company, it “began its Christmas advertising in the 1920s with shopping-related ads in magazines like The Saturday Evening Post. The first Santa ads used a strict-looking Claus, in the vein of Thomas Nast.”[2] By the 1930s, however, Coke’s Santa Claus had a jollier visage. Most of those images were created by illustrator Haddon Sundblom. “Sundblom’s Santa debuted in 1931 in Coke ads in The Saturday Evening Post and appeared regularly in that magazine, as well as in Ladies Home Journal, National Geographic, The New Yorker and others. … Sundblom created his final version of Santa Claus in 1964, but for several decades to follow, Coca-Cola advertising featured images of Santa based on Sundblom’s original works.”

Depictions of Santa Claus wearing a mask remind us that this year’s festivities need to be toned down. We need to celebrate the season safely. Despite the pandemic, I hope you have the merriest of holidays. Better days are ahead.