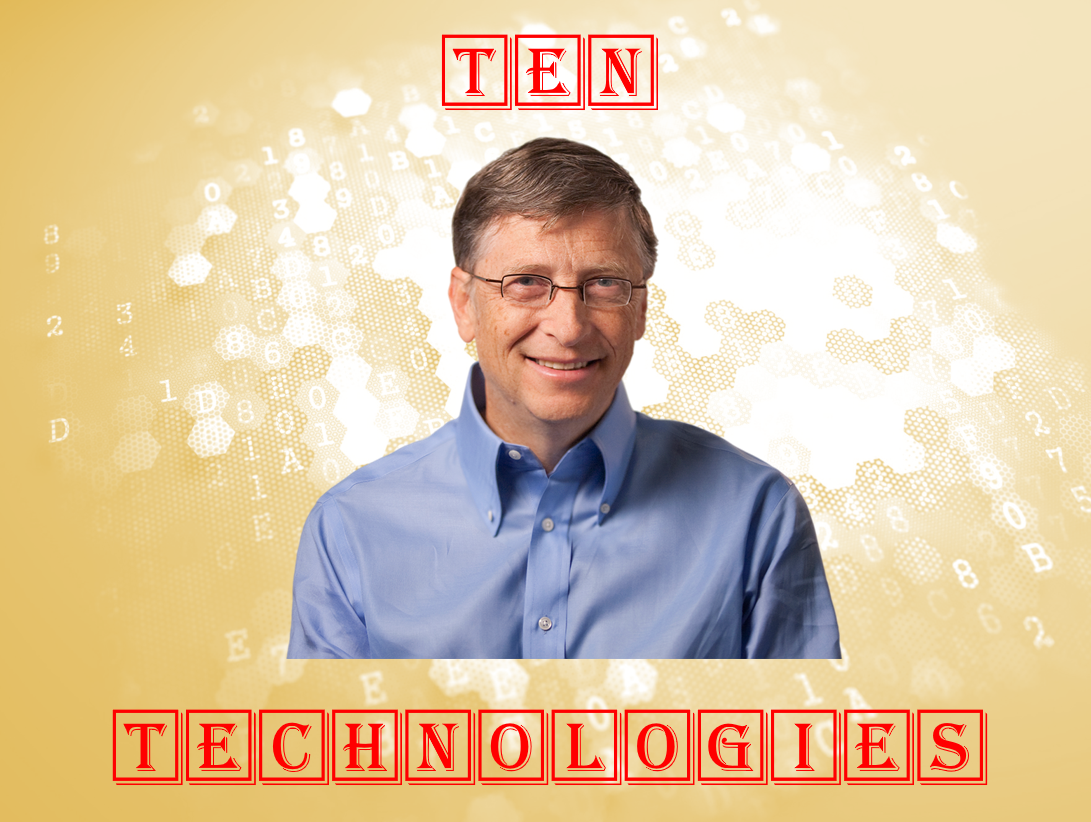 Bill Gates Selects 10 Technologies that will Change the Future

Lots of people venture guesses about which emerging technologies will have the greatest impact on humankind’s future. Recently, Bill Gates (@BillGates), co-founder of Microsoft and well-known philanthropist, selected ten technologies he believes will change the future. Gates is in a unique position among technology prognosticators. Not only is he tech-savvy, he has invested millions of dollars around the globe addressing challenges like education and health. He is remarkably well-informed about the challenges faced by humanity and how technology can address them. In a recent article about Leonardo da Vinci, Gates writes, “I feel optimistic about the future because I know that advances in human knowledge have improved life for billions of people, and I am confident they will keep doing so.”[1] Gates admires da Vinci’s curiosity and how he was able to make connections between science and art. Gates, too, is a connector. He writes, “In my own work today, I get to connect with brilliant people who have this same spirit. When I meet with scientists to discuss inventing new vaccines, for example, I see in them a similar passion for learning about the world and turning their knowledge into big breakthroughs that make our lives better. That, more than anything, is the root of my optimism.” This ability to connect a variety of disciplines encouraged MIT Technology Review staff members to ask Gates to curate their latest list of breakthrough technologies. About the task, Gates writes, “I wanted to choose things that not only will create headlines in 2019 but captured this moment in technological history.”[2]

1. Robot dexterity. Gates writes, “For all the talk about machines taking jobs, industrial robots are still clumsy and inflexible.” The MIT staff notes, “If robots could learn to deal with the messiness of the real world, they could do many more tasks.” For example, we know we have to feed billions of more people in the years ahead yet workers continue to abandon agriculture. Dexterous robots capable of picking fragile fruits and vegetables could help ensure enough agricultural workers are available to feed the world. Will Knight (@willknight), MIT Technology Review‘s Senior Editor for Artificial Intelligence, adds, “We’ll need further breakthroughs for robots to master the advanced dexterity needed in a real warehouse or factory. But if researchers can reliably employ this kind of learning, robots might eventually assemble our gadgets, load our dishwashers, and even help Grandma out of bed.”

2. New-wave nuclear power. At the dawn of the nuclear age, scientists hoped nuclear power would provide clean, cheap energy for the world. Unfortunately, disasters at Three Mile Island, Chernobyl, and Fukushima Daiichi soured the world on nuclear power. With climate change looming as one of the world’s greatest threats, scientists continue to research nuclear power as a possible alternative energy source. Gates notes, “Advanced fusion and fission reactors are edging closer to reality. New nuclear designs that have gained momentum in the past year are promising to make this power source safer and cheaper. Among them are generation IV fission reactors, an evolution of traditional designs; small modular reactors; and fusion reactors, a technology that has seemed eternally just out of reach.”

3. Predicting preemies. Not surprisingly, several of Gates’ top technologies are health related. The MIT staff notes, “15 million babies are born prematurely every year; it’s the leading cause of death for children under age five.” Gates writes, “A simple blood test can predict if a pregnant woman is at risk of giving birth prematurely. Our genetic material lives mostly inside our cells. But small amounts of ‘cell-free’ DNA and RNA also float in our blood, often released by dying cells. In pregnant women, that cell-free material is an alphabet soup of nucleic acids from the fetus, the placenta, and the mother. Stephen Quake, a bioengineer at Stanford, has found a way to use that to tackle one of medicine’s most intractable problems: the roughly one in 10 babies born prematurely.”

4. Gut probe in a pill. Gates and his wife Melinda are extremely interested in improving people’s health in the developing world. Their work combating malaria is well-known. This gut-checking technology is directed at another condition — environmental enteric dysfunction (EED). Gates writes, “A small, swallowable device captures detailed images of the gut without anesthesia, even in infants and children. Environmental enteric dysfunction may be one of the costliest diseases you’ve never heard of. Marked by inflamed intestines that are leaky and absorb nutrients poorly, it’s widespread in poor countries and is one reason why many people there are malnourished, have developmental delays, and never reach a normal height. No one knows exactly what causes EED and how it could be prevented or treated. Practical screening to detect it would help medical workers know when to intervene and how.”

5. Custom cancer vaccines. Anyone who has ever undergone chemotherapy knows how difficult it can be. The chemicals used to kill cancer cells can also kill healthy cells. The medical profession is fond of saying, “Prevention is better than cure.” And there is no better place to put this aphorism to work than in oncology. Custom cancer vaccines are designed to improve treatment with less stress on the body. Gates writes, “The treatment incites the body’s natural defenses to destroy only cancer cells by identifying mutations unique to each tumor. Scientists are on the cusp of commercializing the first personalized cancer vaccine. If it works as hoped, the vaccine, which triggers a person’s immune system to identify a tumor by its unique mutations, could effectively shut down many types of cancers. By using the body’s natural defenses to selectively destroy only tumor cells, the vaccine, unlike conventional chemotherapies, limits damage to healthy cells. The attacking immune cells could also be vigilant in spotting any stray cancer cells after the initial treatment.”

6. The cow-free burger. For several years now, Gates has been interested in lab-grown meat. Lab grown meat could help satisfy the world’s growing desire for meat at the same time eliminating greenhouse gases generated by livestock. The MIT staff notes, “Livestock production causes catastrophic deforestation, water pollution, and greenhouse-gas emissions.” Gates writes, “Both lab-grown and plant-based alternatives approximate the taste and nutritional value of real meat without the environmental devastation. … Making lab-grown meat involves extracting muscle tissue from animals and growing it in bioreactors. The end product looks much like what you’d get from an animal, although researchers are still working on the taste.”

7. Carbon dioxide catcher. Most of the world recognizes climate change as a serious problem requiring immediate attention. The MIT staff notes, “Removing CO2 from the atmosphere might be one of the last viable ways to stop catastrophic climate change.” Gates writes, “Practical and affordable ways to capture carbon dioxide from the air can soak up excess greenhouse-gas emissions. Even if we slow carbon dioxide emissions, the warming effect of the greenhouse gas can persist for thousands of years. To prevent a dangerous rise in temperatures, the UN’s climate panel now concludes, the world will need to remove as much as 1 trillion tons of carbon dioxide from the atmosphere this century. In a surprise finding last summer, Harvard climate scientist David Keith calculated that machines could, in theory, pull this off for less than $100 a ton, through an approach known as direct air capture. That’s an order of magnitude cheaper than earlier estimates that led many scientists to dismiss the technology as far too expensive — though it will still take years for costs to fall to anywhere near that level. But once you capture the carbon, you still need to figure out what to do with it.” One promising use, Gates notes, is in synthetic fuels.

8. An ECG on your wrist. People already wear smart watches and fitness trackers; but, as Gates notes, “Fitness trackers aren’t serious medical devices.” The technology he is highlighting provides an electrocardiogram to help diagnose abnormalities before they cause a stroke or heart attack. Gates explains, “ECG-enabled smart watches, made possible by new regulations and innovations in hardware and software, offer the convenience of a wearable device with something closer to the precision of a medical one.”

9. Sanitation without sewers. Another area of interest for the Gates’ has been dealing with human excrement. Although the subject isn’t often discussed in polite company, Gates notes, “About 2.3 billion people don’t have good sanitation. The lack of proper toilets encourages people to dump fecal matter into nearby ponds and streams, spreading bacteria, viruses, and parasites that can cause diarrhea and cholera. Diarrhea causes one in nine child deaths worldwide.” That’s why toilets matter and Gates asserts, “Energy-efficient toilets can operate without a sewer system and treat waste on the spot.”

10. Smooth-talking AI assistants. It wouldn’t be right to have a Gates-selected list without at least one computer-related technology on it. Gates writes, “New techniques that capture semantic relationships between words are making machines better at understanding natural language. … Recent advances are about to expand your digital assistant’s repertoire. … These improvements, coupled with better speech synthesis, are letting us move from giving AI assistants simple commands to having conversations with them. They’ll be able to deal with daily minutiae like taking meeting notes, finding information, or shopping online.” Karen Hao (@_KarenHao), artificial intelligence reporter for MIT Technology Review adds, “Once we cross that hurdle, we’ll see yet another evolution, perhaps from logistics coordinator to babysitter, teacher — or even friend.”

Obviously there are other technologies that could impact the future as much as those selected by Gates. His perspective, however, is unique because he and his wife have put their money behind developing many of the technologies he has identified. He remains a visionary and his perspective is always interesting and entertaining.