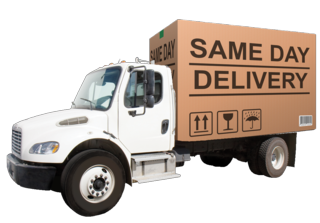 Same-Day Delivery: Is It Worth the Cost?

According to analysts at the Boston Consulting Group (BCG), “Same-day delivery, a concept that bombed during the dot-com era of the late 1990s, is back on the loading dock.” [“Same-Day Delivery: Not Yet Ready for Prime Time,” by Vlad Lukic, Robert Souza, and Meldon Wolfgang, bcg.perspectives, 2 April 2013] They explain:

“Today, same-day delivery has returned—with a new set of propulsive forces. The online retail market is now much larger. Traditional retailers are under pressure from online shops such as Amazon to offer fast delivery, and carriers are facing competition from upstart same-day companies such as Shutl, Zipments, Instacart, and Postmates. In conversations with BCG, executives at retailers and carriers said that they feel compelled to respond to these threats.”

“According to a Web site posted by the company, a small number of testers (ages 18 and up) will be able to purchase goods online from partners such as Target, Staples and Walgreens and get same-day delivery through a Google courier service. … The company said that testers can browse local stores to find what they need, and just have to select a delivery window to receive their goods on the same day.”

Tsukayama notes that Google’s same-day delivery service places “the company in direct competition with Amazon and eBay as well as retailers like Wal-Mart.” Speaking of Wal-Mart, in one of the more interesting storylines in the same-day delivery arena, the company “is considering a radical plan to have store customers deliver packages to online buyers, a new twist on speedier delivery services that the company hopes will enable it to better compete with Amazon.com Inc.” [“Wal-Mart mulls getting customers to deliver packages to online buyers,” Reuters, NBC News, 28 March 2013] The article continues:

“A plethora of start-ups now help people make money by renting out a spare room, a car, or even a cocktail dress, and Wal-Mart would in effect be inviting people to rent out space in their vehicle and their willingness to deliver packages to others. Such an effort would, however, face numerous legal, regulatory and privacy obstacles, and Wal-Mart executives said it was at an early planning stage. Wal-Mart is making a big push to ship online orders directly from stores, hoping to cut transportation costs and gain an edge over Amazon and other online retailers, which have no physical store locations. Wal-Mart does this at 25 stores currently, but plans to double that to 50 this year and could expand the program to hundreds of stores in the future. Wal-Mart currently uses carriers like FedEx Corp for delivery from stores – or, in the case of a same-day delivery service called Walmart To Go that is being tested in five metro areas, its own delivery trucks.”

Although the idea of having customers serve as couriers is intriguing, it raises a lot of questions. How would “courier customers” be vetted to ensure that they don’t just drive off with the goods or use them as a pretext to get vulnerable individuals to open their doors so other nefarious activities such as robbery and rape can take place? The article notes that vetting is possible. It reports, “Zipments was founded in 2010 as a crowd-sourced delivery network that allowed anyone over 18 years old with a vehicle, a text-enabled phone, and a PayPal account to bid on courier services for local businesses. Such online match-making businesses often push legal boundaries – and a Wal-Mart crowd-sourced delivery program would be no different.” A similar company called Deliv uses an “extensive filtering process” before hiring local drivers. [“Deliv’s same-day delivery service may finally give retailers a fighting chance against Amazon,” by Ricardo Bilton, VentureBeat, 12 April 2013] Bilton claims, “Between background checks, a tough certification process, audits, and a ratings system, Deliv is doing a lot to ensure that its drivers are professional ones.” The Reuters article continues:

“Wal-Mart would offer a discount on the customers’ shopping bill, effectively covering the cost of their gas in return for the delivery of packages, he added. ‘This is at the brain-storming stage, but it’s possible in a year or two,’ said Jeff McAllister, senior vice president of Walmart U.S. innovations. Indeed, the likelihood of this being broadly adopted across the company’s network of more than 4,000 stores in the United States is low, according to Matt Nemer, a retail analyst at Wells Fargo Securities.”

Scott Kirsner believes that “same-day service is just the beginning of a new wave of experimentation that could pose yet another Darwinian challenge to brick-and-mortar businesses of all sizes.” [“Same-day delivery a new threat to retailers,” Boston Globe, 7 April 2013] I’m not sure that’s true. If, like the Google plan, local stores are used as fulfillment centers for online orders, same-day delivery may actually give local stores new life. According to Kirsner, “EBay is building its own network of ‘shopping valets’ for its eBay Now mobile app, launched in August. They fetch merchandise from chain stores like Nordstrom and Best Buy, and deliver it for $5. Consumers can follow their progress on a map, and get an estimate of arrival time.” It wouldn’t take much effort to get mom-and-pop stores involved in such a network. Nevertheless, smaller stores see cause for concern. One of the biggest concerns is cost. Kirsner reports, “Forrester Research analyst Sucharita Mulpuru believes that all of today’s same-day services are operating at a loss, and that most consumers wouldn’t be willing to pay the full price if it was passed on to them.”

That fact raises the questions that the BCG analysts wanted answered: Is the compulsion retailers and carriers are feeling to implement same-delivery justified? To find out, they “surveyed 1,500 U.S. consumers about what would cause them to buy more online.” What they discovered was that “most consumers care more about low-cost merchandise and free delivery and returns than same-day delivery.” That result led the analysts to conclude:

“Retailers and carriers will need to carefully segment the market by customer, product, and ‘buying moment’ in order to make same-day delivery work. In creating mass-market strategies, retailers would be better off focusing their efforts on improving other aspects of their multichannel offerings, and carriers should focus on creating seamless and enhanced delivery and routing services while they beta-test the operating requirements and revenue benefits of same-day delivery.”

Because same-day delivery cannot be justified using either financial or demand arguments, the BCG analysts recommend that it only be implemented when small profit margins can be maintained. They believe there is some money to be made if same-day delivery in implemented in that way. They write:

“In 2013, same-day delivery could conceivably generate between $425 million and $850 million in delivery fee income. That estimate assumes that consumers are willing to pay shipping fees of between $6 and $10 per purchase and that up to 2 percent of all orders are delivered on the same day. Offering the service at this price will leave very limited margin for retailers and parcel carriers. For the carrier industry, which generates $70 billion in annual revenues from parcel shipping, the projected revenue from same-day shipping is relatively modest — especially for the big companies. Thus, same-day delivery will likely remain a highly segmented niche market in the absence of subsidies from carriers or retailers. In any scenario, carriers and retailers will have to play large roles in creating, shaping, and energizing the service.”

The analysts believe the targeted demographic for same-day delivery service should be “‘affluent Millennials’ — consumers aged 18 to 34 with household incomes exceeding $150,000. Affluent Millennials are 56 percent more likely to purchase same-day delivery than the average online consumer. They are also big spenders, buying $840 worth of goods online per quarter per person, compared with $289 for the average online consumer.” The analysts admit that some companies may offer same-day delivery service for reasons other than profit (such as enhancing brand perception or differentiating themselves from the competition), but these “soft benefits” are limited. Their bottom line: “Economics and history suggest that retailers and carriers should go slowly in developing same-day delivery services.”